8 Best Places to Live in Queens

By Alina Sokirko
Oct 3rd 2022
Share:
As the largest borough by area in New York City, Queens is also the most diverse. From Long Island City, with its high-rises, waterfront location, and proximity to Manhattan, to more quaint, suburban neighborhoods like Middle Village, Queens has a little something for everyone. As with much of NYC, recent decades have brought about a real estate boom in Queens, leading to an influx of new residents and businesses. Here are the best places to live in Queens.

The best place to live in Queens is Forest Hills, a unique neighborhood that offers residents a mix of tranquil suburban living combined with easy access to all the perks of urban New York City living.

This has made Forest Hills highly desirable among families and anyone who prefers to come home and escape the urban jungle while remaining just a short subway ride from the heart of the city.

In recent years a number of new condos and apartment complexes have been built in the neighborhood, but overall the real estate market is mostly comprised of single-family homes and co-ops. Many of the larger houses in Forest Hills have stunning Tudor architecture, giving the neighborhood an aristocratic vibe.

While real estate prices in Forest Hills have been on the rise, apartments and houses in the neighborhood still remain well-priced compared to NYC’s other popular nabes.

Forest Hills is one of the best places to live in Queens, as it boasts great public schools, low crime, and excellent public transportation, thanks to its location in central Queens.

Named for John Jacob Astor, the neighborhood has a rich history and was one of America's earliest filmmaking centers for much of the early 20th century, with film industry legends like the Marx Brothers shooting multiple movies in the neighborhood.

Astoria is also known as the Greek capital of New York City, but is nonetheless home to an incredibly diverse population, making it a haven for foodies who enjoy the neighborhood's bevy of great ethnic restaurants. Astoria Park, a picturesque riverfront, and museums such as the Noguchi Museum and Socrates Sculpture Park are other popular destinations in this thriving New York City neighborhood.

Kew Gardens is one of the best neighborhoods in Queens for commuters. Kew Gardens borders Forest Hills and has a similar, tranquil vibe while providing access to the LIRR as well as the E subway line.

Kew Gardens is fantastic for families and nature lovers as it has plenty of green space, with Forest Park and its many hiking trails located just west of the neighborhood. Real estate prices in Kew Gardens are also more affordable than in other parts of Queens, and the neighborhood is well-known for its beautiful Tudor homes with their distinctive British architecture.

Although Kew Gardens is calmer than other parts of Queens, the neighborhood boasts a vibrant restaurant and bar scene with plenty of places to grab a cocktail or bite to eat on Metropolitan Avenue and Lefferts Boulevard.

With a storied history dating back to the 1640s, Flushing is one of the oldest communities in Queens and was one of just five original towns to be part of Queens County back in the 17th century.

Nowadays, Flushing is known as one of New York City's melting pots and for its large Chinese and immigrant communities, with approximately two-thirds of residents in the neighborhood being foreign-born. Flushing Chinatown is one of the largest and fastest-growing in the world and rivals Manhattan's Chinatown in size, importance, and cultural influence.

As you might imagine, this has made the neighborhood a foodies paradise, with restaurant-goers making the trek to Flushing from all over the city. When it comes to real estate, prices in Flushing pale in comparison to other neighborhoods, making it popular for those looking for a great value. The tradeoff, however, is a longer commute as it can take 45 minutes to an hour train ride to get into Midtown Manhattan, and even longer to make it to Downtown Brooklyn.

Sunnyside is a primarily residential neighborhood located in western Queens, only a short subway ride, on the seven train, from Midtown Manhattan. Sunnyside is one of the best places to live in Queens thanks to its reasonable real estate prices, low crime rate, and great location.

Although it is close to the epicenter of New York City, Sunnyside maintains a far more laid-back, suburban vibe, which has made it a popular neighborhood with families. In Sunnyside, friendly neighbors spend more time getting to know one another compared to other parts of the city creating a tight-knit community.

With such a welcoming atmosphere, it's no surprise that Sunnyside has a burgeoning and culturally diverse food & bar scene. Another major perk of living in the neighborhood is that apartment prices in Sunnyside are typically much lower than in neighboring Long Island City and Astoria.

One thing that Sunnyside lacks, however, is nightlife, but thanks to its central location you're only a short 25-minute subway ride from Midtown Manhattan. 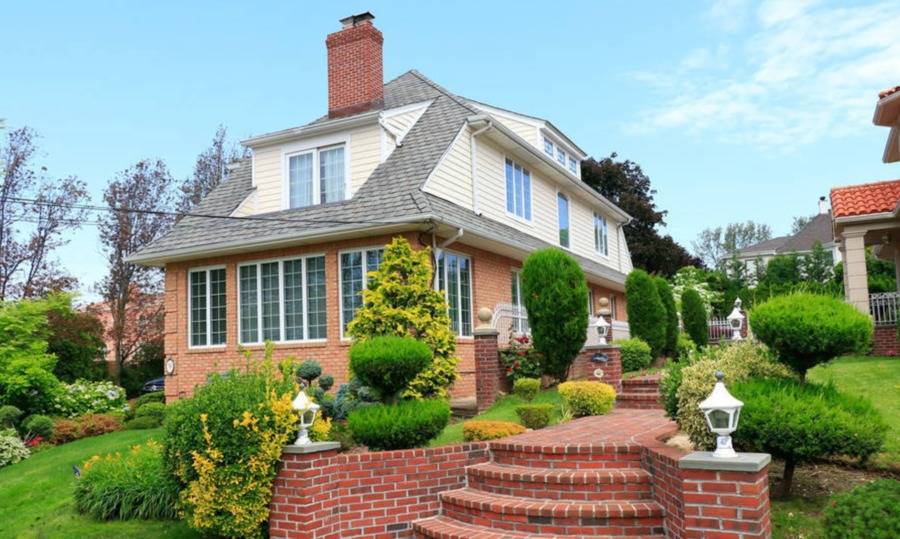 Middle Village is one of the best place places to live in Queens if you want to escape the hustle and bustle of NYC. The neighborhood is best described as a village within a city. While Middle Village is close to the geographic center of Queens, the area is actually quite isolated, with little public transportation, making it feel very suburban.

Most residents get around by car, and many New Yorkers would have a hard time pointing to the neighborhood on a map. To many, however, it’s one of the city's best-kept secrets, a verdant residential neighborhood that’s only a 30-minute drive from Manhattan.

This has made it popular with families with children. When it comes to the real estate market in Middle Village, you can expect to find moderately priced properties, and most of the inventory is single-family homes. There are also some multi-family properties and condos, but they can be harder to come by.

Located on the westernmost end of Queens, just across from Midtown Manhattan and Roosevelt Island, Long Island City (often shortened to LIC) has long been considered to be one of New York City’s most exciting up-and-coming neighborhoods. Those days are over as we can confidently say that Long Island City has already arrived, and can now be considered to be amongst NYC’s most desirable residential neighborhoods.

Long Island City provides residents easy access to Manhattan and a convenient commute while also offering a colorful and exciting cultural and entertainment scene. A fantastic array of locally owned boutiques, art galleries, and shops, as well as many hip bars, lounges, and restaurants, can be found throughout LIC.

The neighborhood’s incredible riverfront location combined with stunning views of the midtown skyline, and attractive real estate prices at its many luxurious, new development apartment buildings and condos are what helped Long Island City boom, but nowadays the neighborhood’s hip and artistic vibe is just as responsible for charming residents and visitors alike.

Jackson Heights is one of the best neighborhoods in Queens thanks to its attractive real estate prices and central location, which offers residents a quick and easy 25-minute commute to midtown Manhattan.

Many of the neighborhood's newer residents have been priced out of Brooklyn (long gone are the days when those priced out of Manhattan could look to Brooklyn for affordable housing) and are interested in Jackson Heights' unique housing stock, which includes Tudor architecture and pre-war coops, many of which have private gardens.

Unsurprisingly, this has driven real estate prices up in recent years, but the neighborhood still remains a great value and has maintained its welcoming vibe avoiding the large-scale new development other parts of Queens and Brooklyn have experienced.

Jackson Heights also appeals to those who want to live in one of NYC's most diverse neighborhoods (over 50% of residents are foreign-born and there are over 150 languages spoken in the neighborhood). This, of course, means the area has a vibrant food scene, with some of the best ethnic restaurants in the entire city. Nightlife, however, is more subdued, making Jackson Heights ideal for families.

Featured Posts
When Does a Seller Get Their Money After Closing on a House?
Buying a Condo in NYC: 12 Step Guide
Best First Time Home Buyer Programs & Grants in NYC
NYC Mansion Tax Guide
Buying a Co-op in NYC: A Guide for 2022
More from the blog
Popcorn Ceiling Removal Cost
How to Remove Popcorn Ceiling
Where to Buy and Sell Used Furniture in NYC
Types of Ceiling Finishes
16 Best New York Suburbs
Modular Home Prices
Net Operating Income Guide
17 Best Places to Live in Brooklyn