A look at 11 of the Greenest Residential Buildings in NYC

The PropertyClub Team
Aug 8th 2019
Share:
Environmentally friendly building techniques have been around for decades, in some form or another, but they’ve only recently gone mainstream. The development of green building standards like BREEAM or LEED have created incentives for developers and have raised awareness of the importance of constructing sustainable buildings.

Nowadays, LEED certifications granted by the U.S. Green Building Council are the most well-known and most sought-after by developers and property managers, both for commercial projects and residential buildings. Yet LEED is not the only way to measure the energy efficiency of residential buildings anymore. The passive house trend has caught momentum in recent years, and New York City welcomed its first such project in 2017. Experts claim that passive houses are even more eco-friendly than LEED-certified developments, capable of slashing up to 90 percent of a building’s energy consumption. A building can also aim to achieve both passive house status and LEED certification, however, the ‘Passivhaus’ concept isn’t that widespread in the U.S. yet.

With New York City aiming to become carbon neutral by 2050, and with housing being one of the main polluters in the crowded metro, developers are striving to build greener and greener residential projects. We’ve rounded up a list of 11 of the most environmentally friendly such buildings in the city, and we’ve included both LEED projects and passive houses. Check them out below: 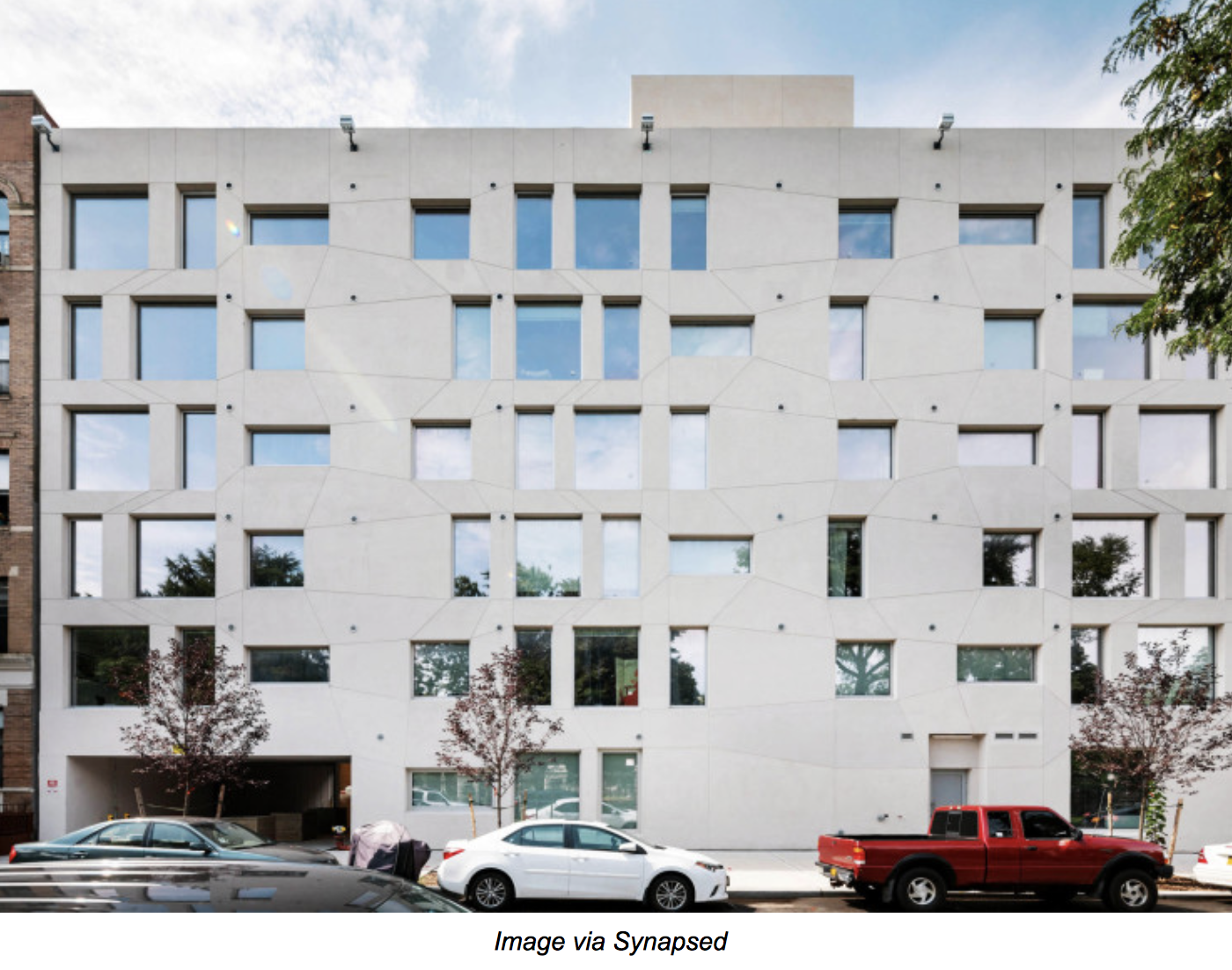 The 34-unit Perch Harlem is located in the heart of Hamilton Heights at 542 West 153rd Street and is Manhattan's first passive house development, completed in 2017. The luxury building was developed by Synapsed Development Group and Taurus Holdings, having Chris Benedict as the architect, who is known for designing energy-efficient buildings at no extra cost for developers.

The project consumes 80 percent less energy than a building of a similar size, with heavily insulated walls and triple-pane windows, which help residents save money on air conditioning and heating costs. Units range from 520 to 900 square feet, all equipped with appliances that are Energy Star certified. The building has a virtual doorman, an exercise room, a residents' lounge, bicycle storage, and its own parking. 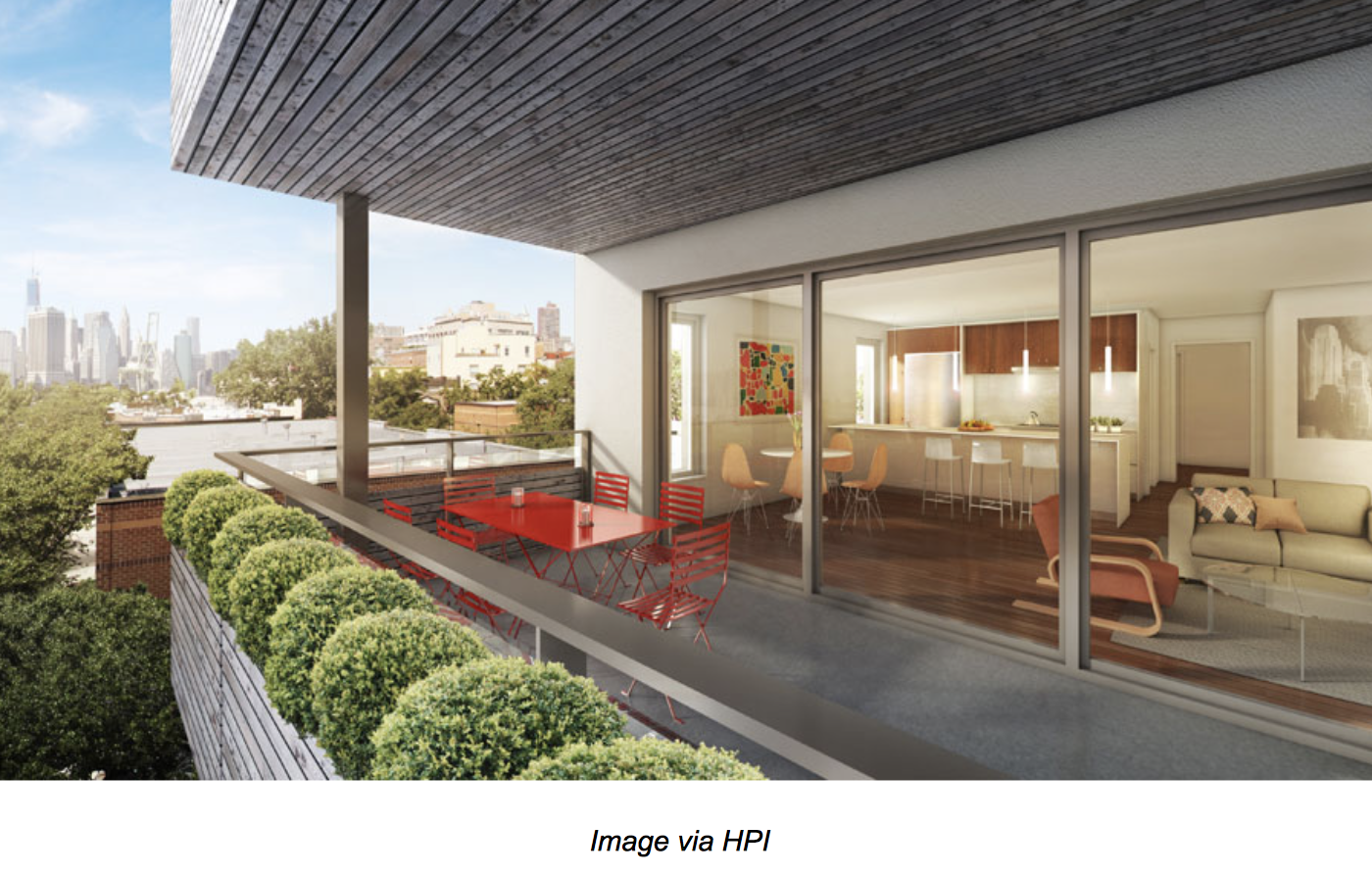 Completed in 2014, HPI Development's six-story, 13-unit condominium at 255 Columbia Street in Brooklyn's Waterfront District was designed by Loadingdock5 using environmentally friendly techniques of passive house projects. This has led to an energy reduction of more than 75 percent in the units by using super insulation, air sealing and a reduction of thermal bridges that minimizes heat flow. The 255 Columbia project has triple-paned windows and mechanical ventilation with heat recovery, as well as efficient heating and cooling technology. The unit mix consists of two- to four-bedroom residences ranging from 900 to 1,950 square feet, each with private outdoor space.

The Verdesian on the Park - Battery Park City 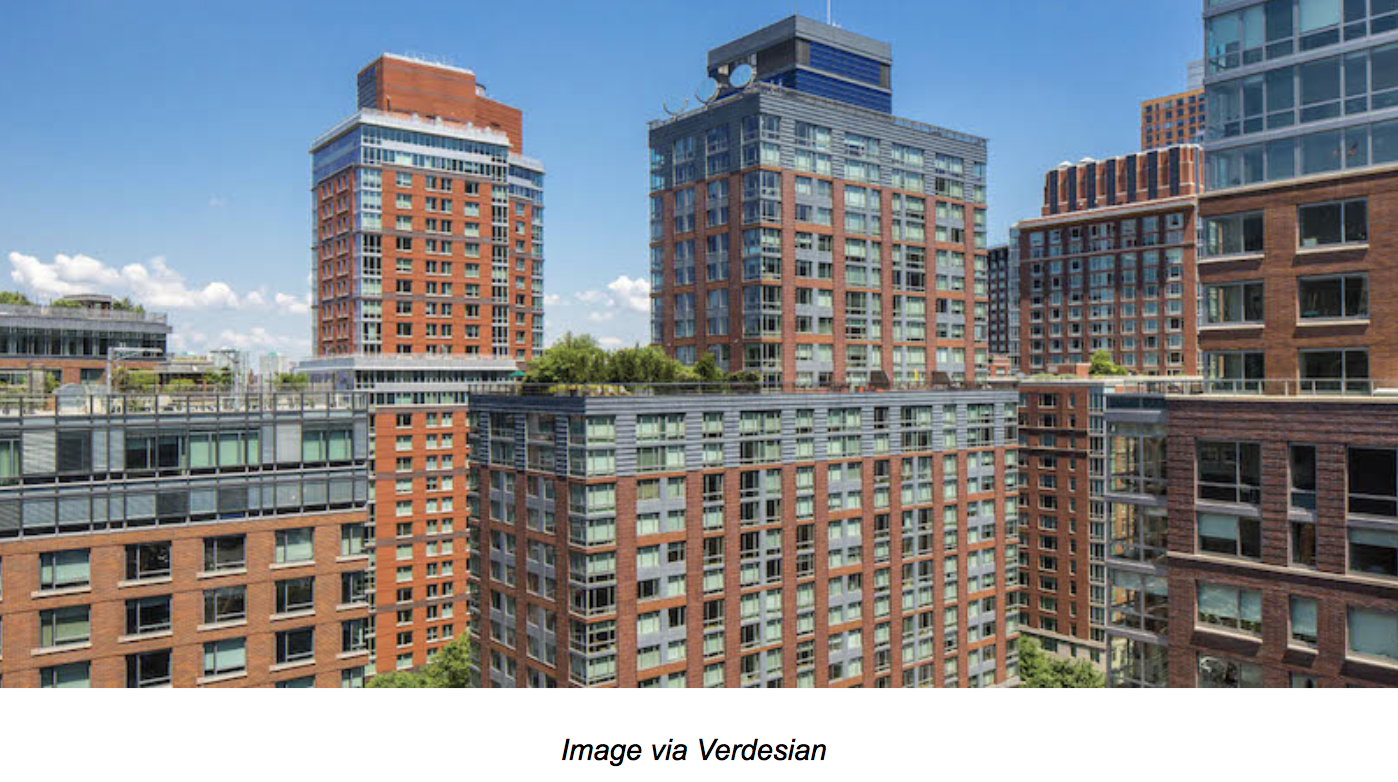 The 26-story Verdesian on the Park at 211 North End Avenue is a pioneering energy-efficient apartment building in Battery Park City. The project developed by the Albanese Organization and Northwestern Mutual was awarded the country's first LEED Platinum certification for a high-rise residential rental building in 2008. It was designed by the architect Rafael Pelli to consume 40 percent less energy, reduce peak demand for electricity by 67 percent and require 50 percent less potable water than a conventional residential high-rise. Roughly 50 percent of the construction materials consist of some form of recycled content, including concrete, steel, public area carpeting, and synthetic gypsum wallboards. During construction, builders also used eco-friendly paints, adhesives, and sealants that emit low or no volatile organic compounds.

About 5 percent of the building’s base energy load is generated by an array of solar panels, while the HVAC system is fueled by natural gas and is free of ozone-depleting refrigerants. In addition, multi-level humidification and ventilation systems supply filtered fresh air to each unit. A high-performance exterior wall system includes a vapor and air barrier to minimize random air infiltration, while the water it receives from the city goes through a central water filtration system before arriving at the faucets inside the residences. The Verdesian also has pesticide-free rooftop gardens landscaped with native plantings, which harvest rainwater for irrigation, reduce stormwater run-off and reduce the urban heat island effect.

The property's windows are treated with spectrally selective Low-E glazing, which filters out UV rays, while efficient insulation minimizes heat loss in the winter and heat during summer.

Inside, LED low-wattage lighting fixtures are complemented by motion sensors in all common areas. Electric power efficiency is boosted by elevators with regenerative drives, a microturbine system with heat recovery technology to simultaneously generate a portion of electricity for the building and heat water for domestic use, as well as high-efficiency pumps and variable speed motors that conserve electric use based on the building demand.

Following the completion of The Verdesian, the same development team worked on a neighboring project that aimed even higher in terms of energy efficiency. The Visionaire was completed in 2009 and earned the first LEED Platinum certification for a condominium building in the country. The same team was responsible for developing The Solaire, the very first green residential project in the country, which earned LEED Gold certification in 2003. 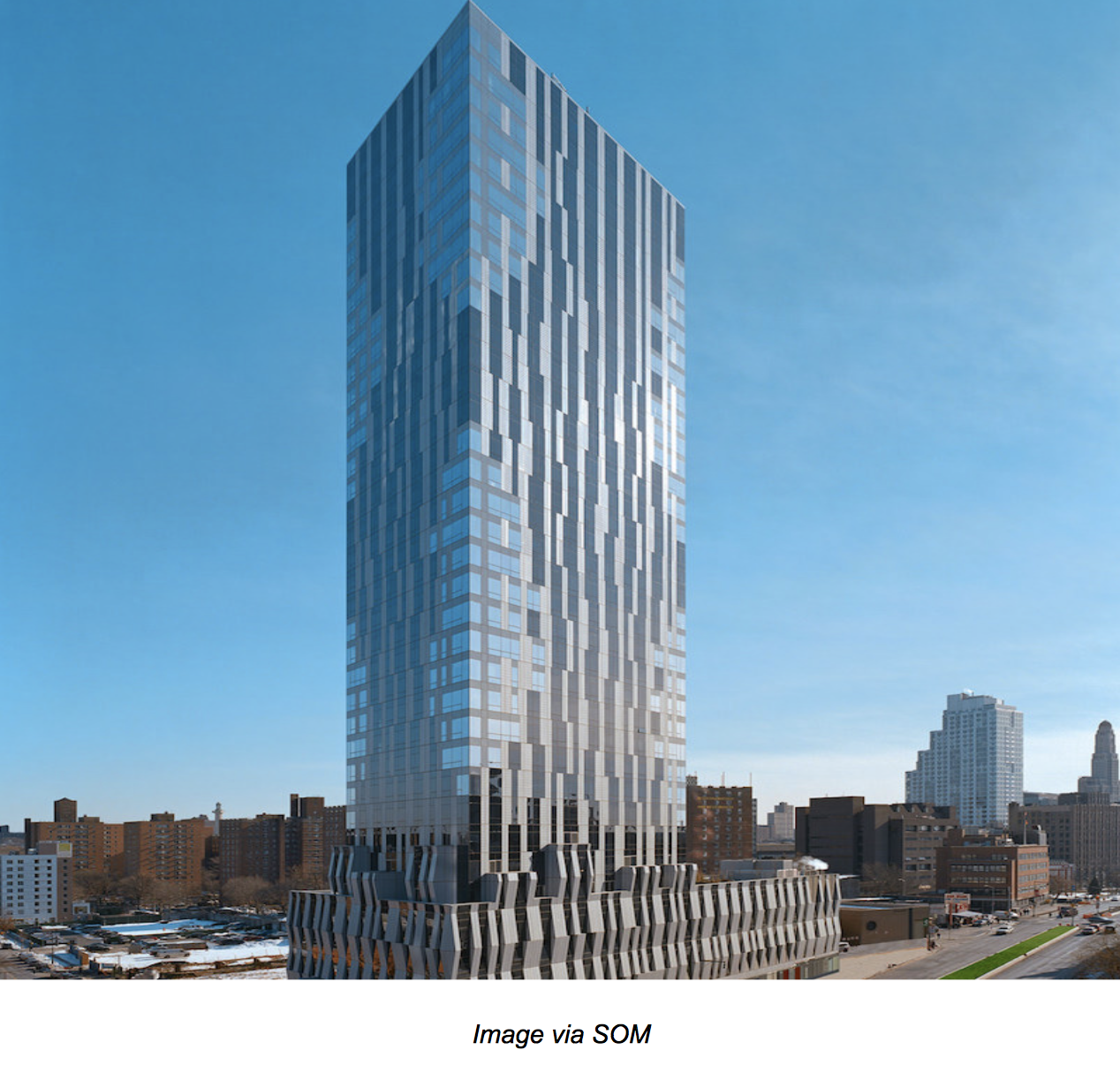 The 38-story condominium is located at 150 Myrtle Avenue, at the intersection of Flatbush and Myrtle Avenue in Downtown Brooklyn. Designed in 2010 by the renowned architectural firm Skidmore, Owings & Merrill and built by BFC Partners, the building catches the eye with its distinctive façade, a patchwork of metal and glass panels. The same year it was completed, Toren earned the Building Brooklyn Award from the Brooklyn Chamber of Commerce, as well as a LEED Gold certification. Sustainable features that brought it recognition from the green building organization include a rain screen system at the tower's base and a cogeneration plant that supplies tenants with power and water.

The community offers 240 units in a mix that caters both to low-income and market-rate households. In addition, it comprises street-level retail and below-grade parking. Amenities include a fitness center, 24-hour concierge service, bicycle room, and on-site superintendent. 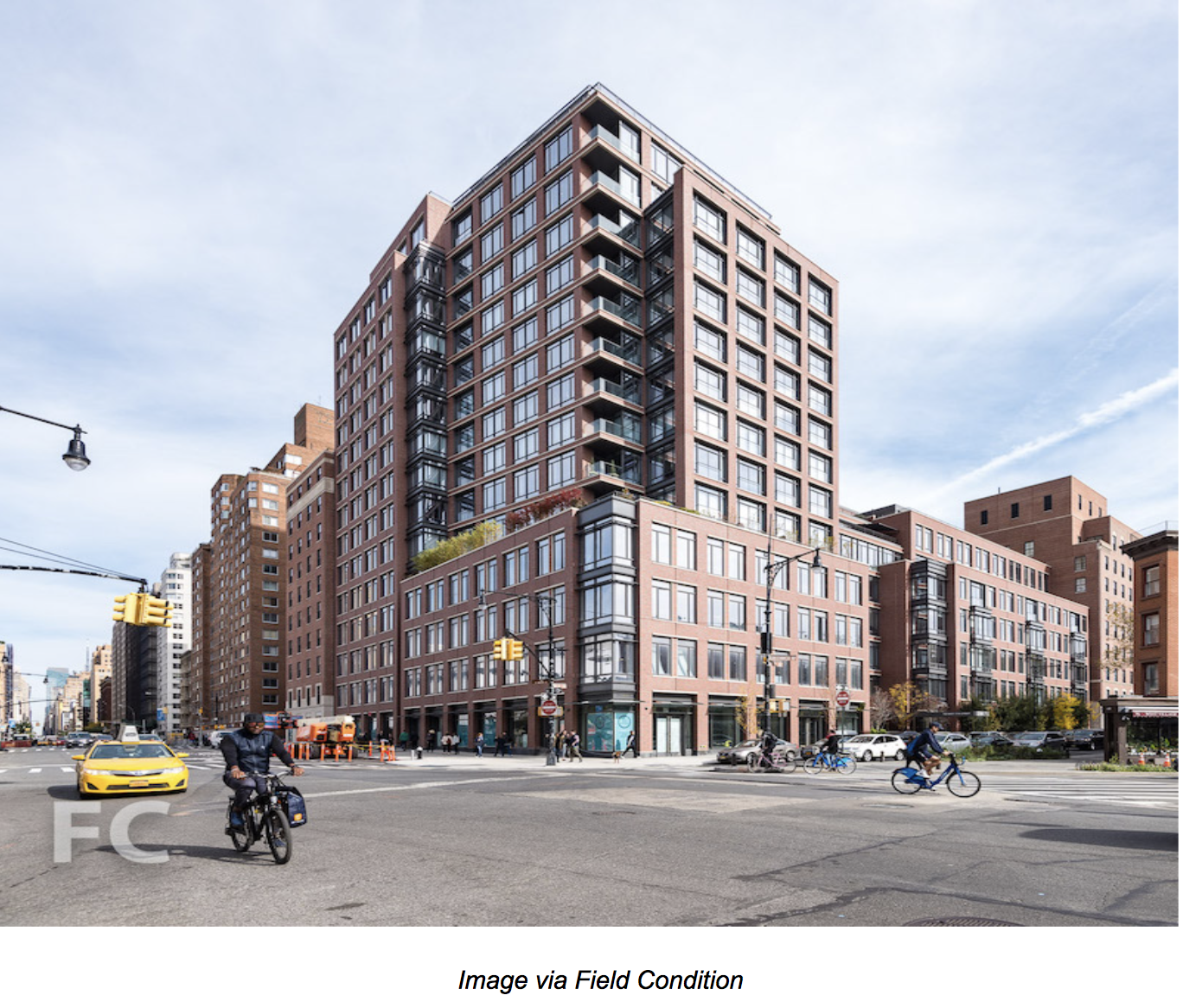 Nestled in the West Village at 55 West 11th Street, the Greenwich Lane was completed in 2016 as a collection of five unique addresses and five townhouses that revitalized the city block between Twelfth and Eleventh streets off Seventh Avenue. The historical restoration and new construction project were created by FXFOWLE for the Rudin family and the Ofer family's Global Holdings on the site of the old St. Vincent's Hospital. Across the street, the developers funded the West Village Park, which hosts the New York City AIDS Memorial. 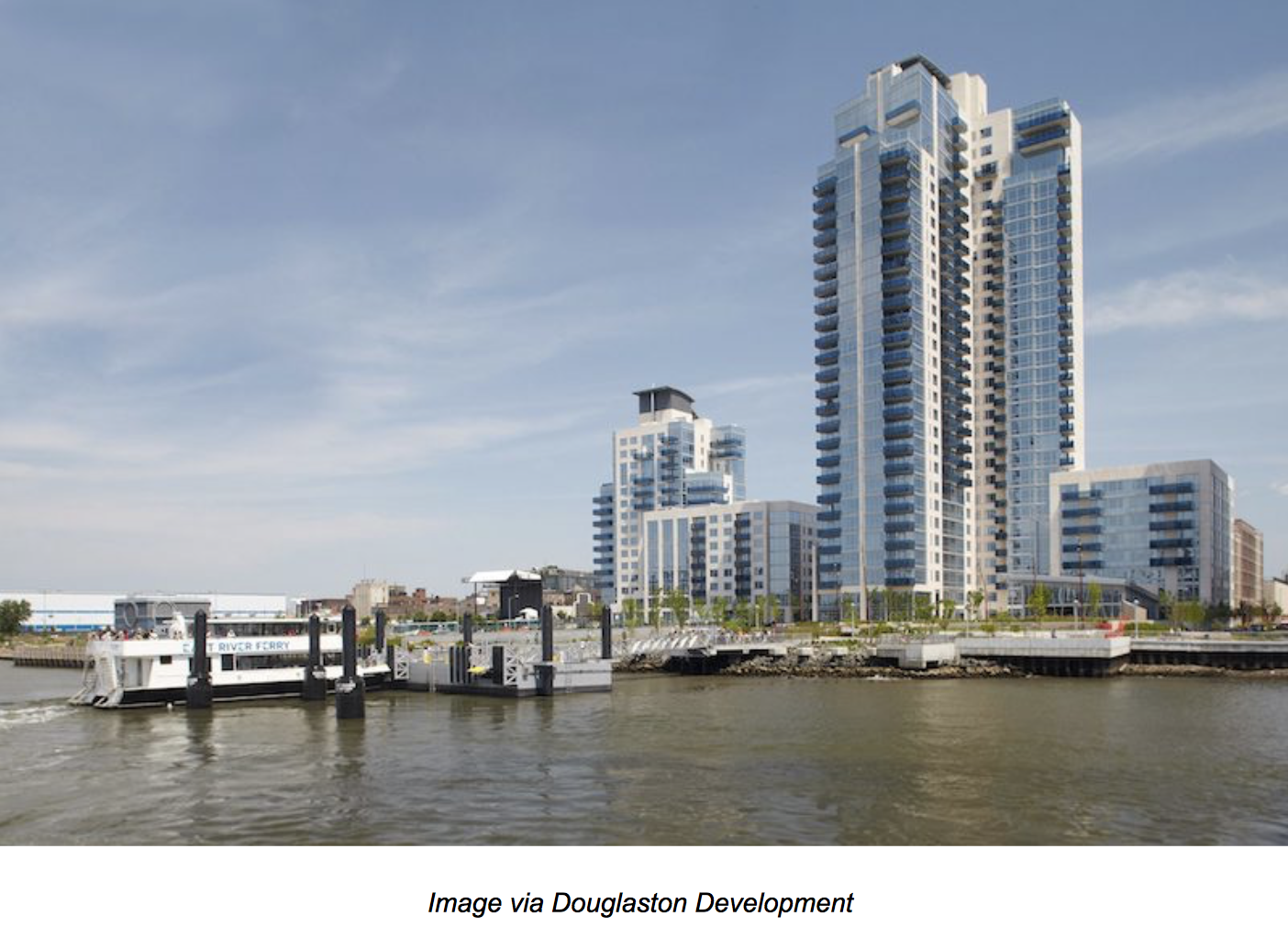 Part of The Edge development, a two-tower development located at 34 North Seventh Street and 22 North Sixth Street that earned a LEED Gold certification in 2012, Williamsburg Edge rises 15 stories high and has 205 residences. The Williamsburg condominium development features energy-efficient windows and walls and sustainably harvested wood for floors and kitchen cabinetry materials. Units are equipped with WaterSense fixtures and Energy Star-rated appliances and are sealed against smoke and odor leakage from adjacent apartments and corridors. The innovative project was developed by Douglaston alongside Levine Builders and architects at SBJ Group and W Architecture & Landscape Architecture LLC.

Occupancy sensors are used for lighting in common areas and roof terraces are equipped with heat-reflective pavers. Approximately 75 percent of construction waste was diverted from landfills and recycled. Combined, the sustainable and energy-efficient features made the Williamsburg Edge exceed the New York State Energy Conservation Code by 17 percent. 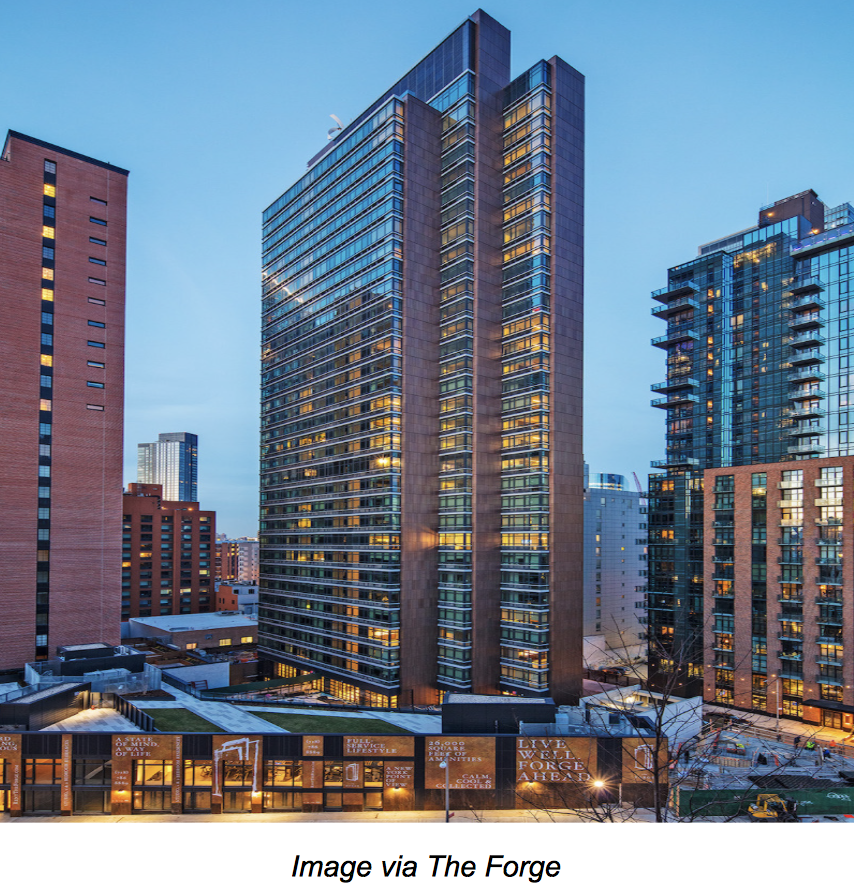 Developed by Brause Realty and Gotham Organization with FXFOWLE as the architect, The Forge at 44-28 Purves Street in Queens' Long Island City is a village in a building. The 38-story tower is pursuing a LEED Silver certification following a set of sustainable features that include the use of wind and solar power for supplemental power, a system that captures rainwater for irrigation purposes, as well as clean air and abundant daylight. In 2018, it received the BQDA Award of Excellence, a recognition established to encourage excellence in architectural design, to raise public awareness of the built environment and to honor architects, owners, and builders of significant projects. Built in 2008, this 18-story luxury building is NYC’s first smoke-free rental residence, where smoking is not permitted anywhere in or on the property. In 2012, 1510 Lexington Avenue earned LEED Silver for building design and construction of the Upper East Side project.

To earn the designation, developer Kenbar Management, and SLCE Architects used LEED-compliant materials and products, including finishes low in volatile organic compounds, which resulted in improved air quality. Other green building features include triple-pane, thermally efficient, extra quiet windows with custom mini-blinds, which allow abundant daylight in the residences. Each unit is well insulated with individually controlled fan coil units with thermostatic controls in every living room, bedroom, and den. In addition, each unit is equipped with Energy Star appliances, water-conserving dual-flush toilets and faucet, and showerheads. A building-wide water filtration system is complemented by a secondary water filtration system via refrigerators for drinking water dispensers and automatic ice makers.

Motion sensors are installed throughout the building to lower lighting levels and energy usage when the areas are unoccupied. Green roofing systems with water-efficient landscaping and highly reflective materials add to the property's insulation while reducing the heat island effect. 1510 Lexington Avenue features priority parking spaces for hybrid and fuel-efficient vehicles, as well as electric charging stations in the garage. 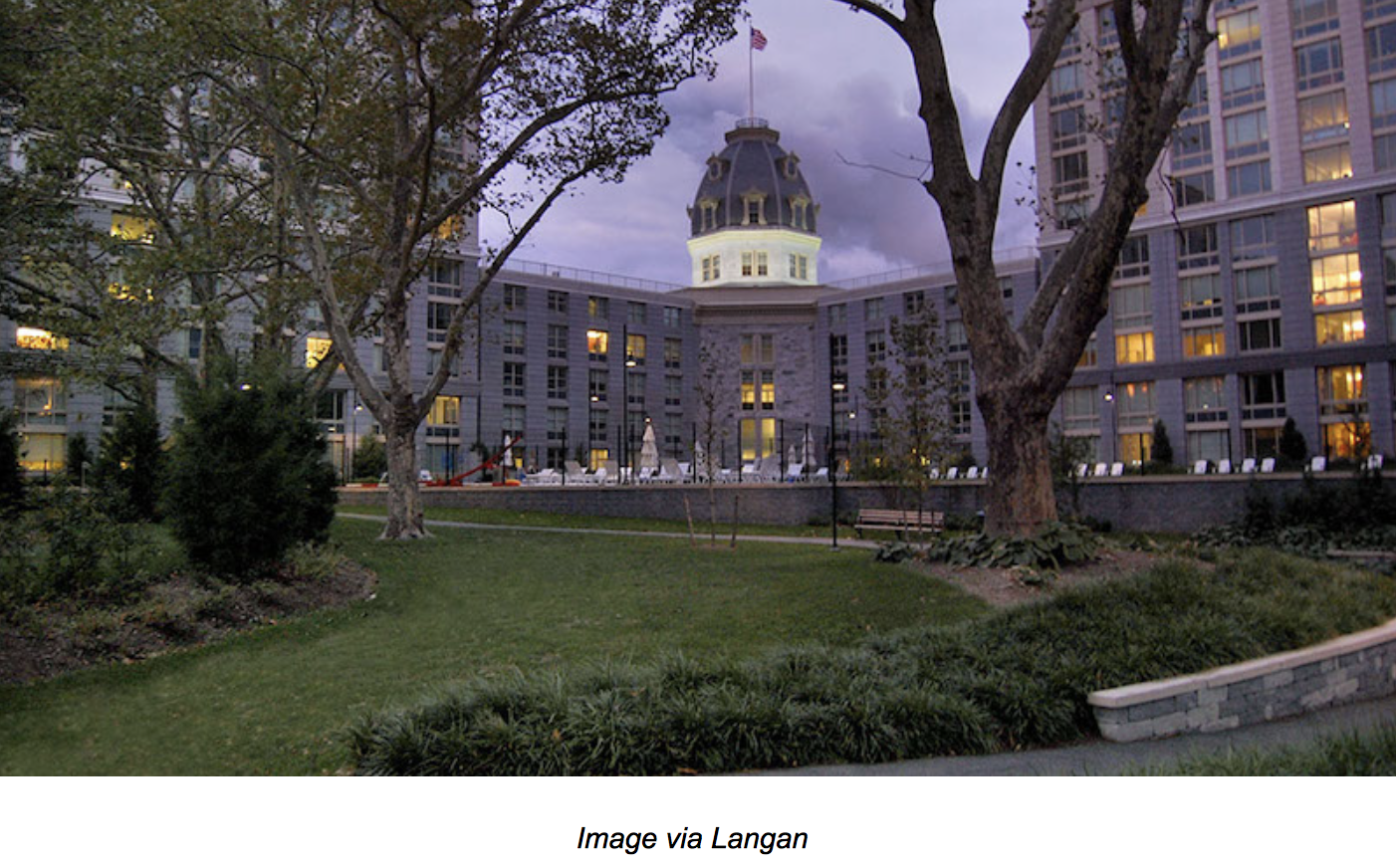 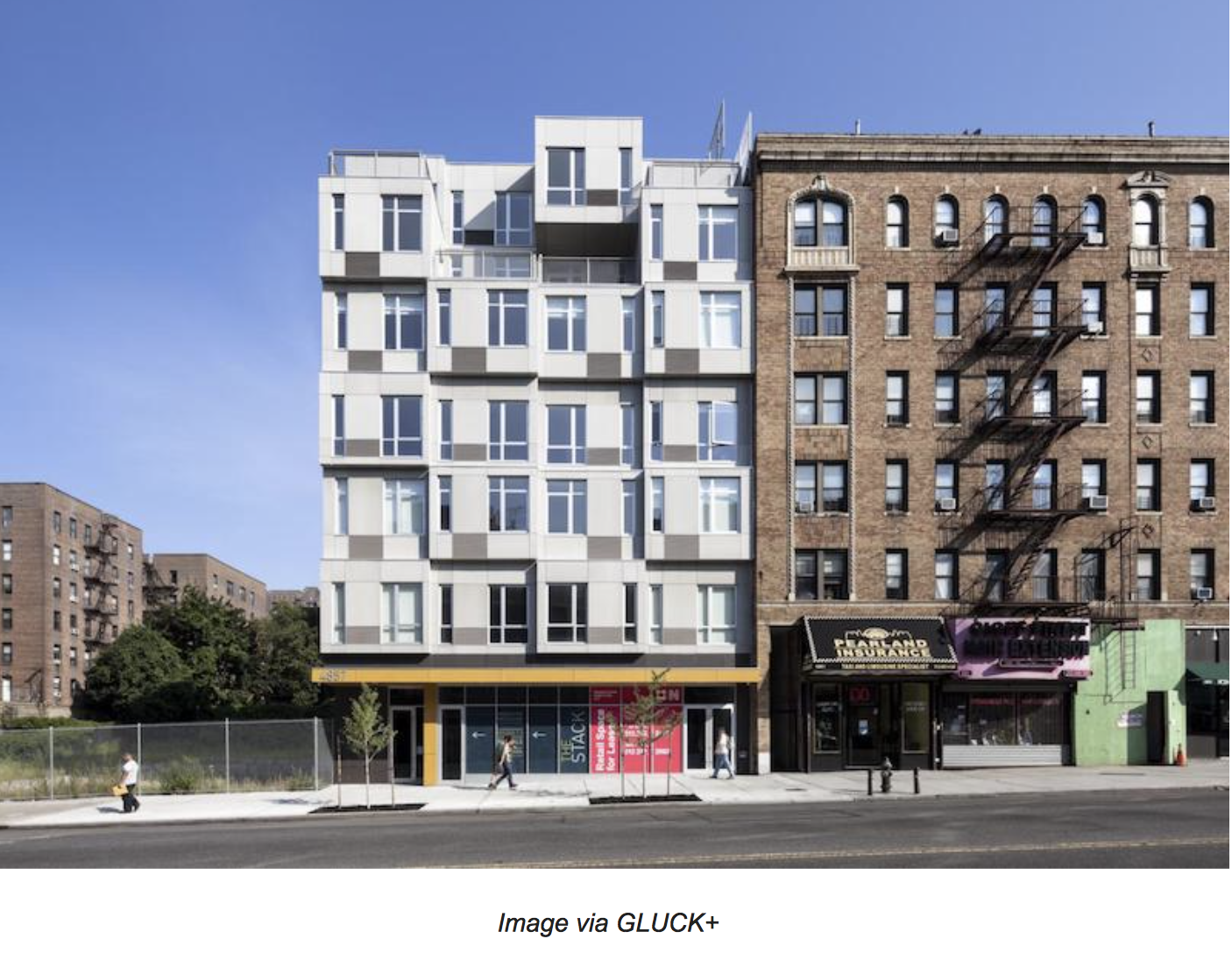 Built out of 56 modules made by Deluxe Building Systems at a factory in Pennsylvania, this seven-story, 28-unit modular construction project at 4857 Broadway in Washington Heights was the first of its kind to be built entirely off-site. The Stack has also saved developers some 15 percent in construction costs. In addition, it has only taken them a few months to prepare the site and lay the foundation, which helped the development achieve a small carbon footprint.

The modules, which were literally stacked one on top of the other, are made of concrete and steel. Large windows filter natural sunlight, and every unit was equipped with stainless steel, Energy Star appliances. Moreover, units feature WaterSense fixtures, as well as individual climate control for heating and cooling. A virtual doorman and a building-wide video intercom system complement the interior features, and a landscaped courtyard offers residents a private space for relaxation. 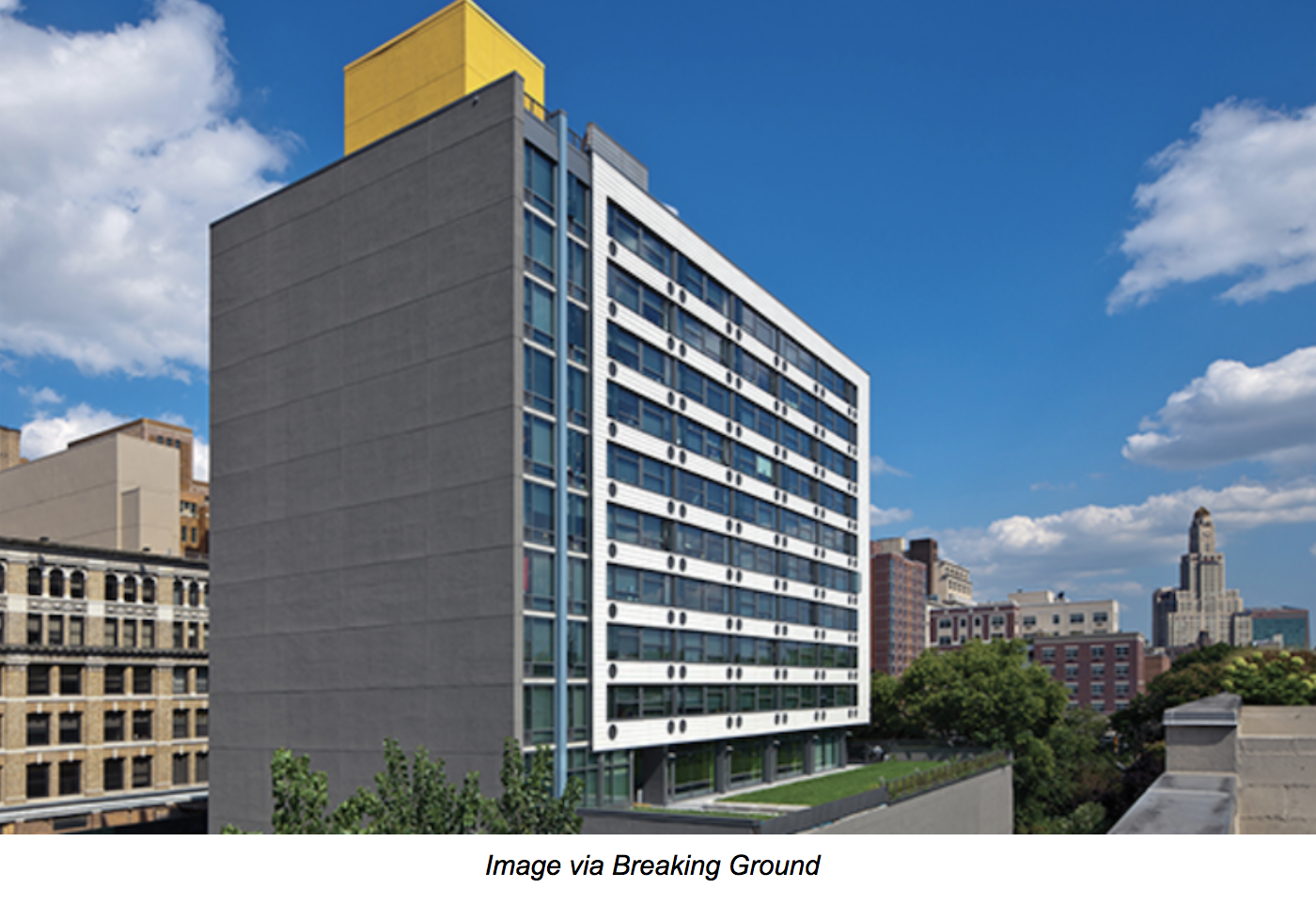 The architects behind iconic properties like The Standard and High Line, Susan T. Rodriguez and Ennead Architects, designed this 217-unit community at 160 Schermerhorn Street in Downtown Brooklyn. Special attention was paid to sustainable features as the building has a green roof terrace, a glass-faced façade, energy-efficient systems, and uses recycled building materials.

The 11-story building has 116 units reserved for formerly homeless individuals with special needs - including HIV/AIDS and mental illness - while the remaining units are leased to low-income residents, most of whom are pursuing careers in the performing arts and entertainment industry. In fact, the Actors Fund of America and non-profit Breaking Ground (formerly Common Ground) teamed up with developers Hamlin Ventures and Time Equities in the project, which opened in 2009. On the ground floor, The Actors Fund operates a 2,000-square-foot performance and educational space, complemented by a dance studio of the Brooklyn Ballet. Breaking Ground manages the property.

More from the blog
Save Money Buying a NYC Apartment with a Broker Commission Rebate
The 10 Best-Selling NYC Residential Buildings of H1 2019
Top 20 Homes Sales of Q2 in NYC - Goodbye Amazon, Hello Jeff Bezos!
Announcing coliving by PropertyClub, find rooms & roommates, and a chance to win a months rent on us!
Rent-Burdened New Yorkers Turn to Coliving, Sacrificing Personal Space for A Good Location
The 100 Most Expensive NYC Zip Codes of H1 2019
Tips for NYC Homebuyers
A Guide to the New York state and NYC Mansion Tax