The PropertyClub Team
Aug 13th 2019
Share:
Luxury apartments keep selling like hotcakes in New York City, and the first half of 2019 was no exception. Prospective homebuyers and real estate brokers were equally busy during the first six months of the year, and sales continued to close, with June seeing a flurry of activity and multiple records being broken in the luxury market as buyers rushed to close before new tax hikes went into effect in July.

With luxury residential towers continuing to crowd the city skyline, especially in Manhattan and Brooklyn, units are selling fast. Demand is high for best-in-class amenities, a great location close to shopping and dining, and exquisite designs by acclaimed architects and interior designers. We wanted to see which were the ten most popular residential buildings among NYC homebuyers during the first half of 2019, to get a better picture of the market and of the months to come.

We came up with a list of the ten best-selling buildings of H1 2019, and they are scattered across Manhattan, Brooklyn, and Queens. All of the buildings on the list are recent projects, the oldest having been completed in 2017. One Manhattan Square, the best-selling building of the year so far, is still under construction, yet its 815 units are selling fast.

The most active brokerage of the first half of 2019 was Corcoran Sunshine Marketing Group, which handles marketing for 4 out of the ten projects on our list. The firm’s efforts led to a combined dollar volume of $755 million in sales during H1, and 211 units sold in total. The brokers joined forces with Related Sales to market two of the developer’s NYC projects, namely 15 Hudson Yards and Carnegie Park.

Equally busy during H1 was Extell Marketing Group, which managed to sell 119 units worth a combined $195 million at One Manhattan Square. Extell Development chose to market the project in-house via its sales and marketing arm.

Douglas Elliman was also active during the first six months of the year, closing on 91 units at 111 Murray Street and 565 Broome SoHo, for a combined total of $501 million. The brokerage partnered with Knightsbridge Strategies and Noë & Associates to market the SoHo project.

Citi Habitats, alongside Pandiscio Green, successfully marketed 62 units at The Greenpoint in Brooklyn, which sold for a combined volume of $95 million. Halstead Property Development Marketing, in partnership with The Aguayo Team, helped close on 37 units worth $23 million at 264 Webster Avenue in Brooklyn. Meanwhile, Queens-based Winzone Realty brokered the sale of 39 units at The Grandview Commons in Flushing, for a total of $22 million.

Check out the full list below, and read on for some highlights about the buildings that made the cut: 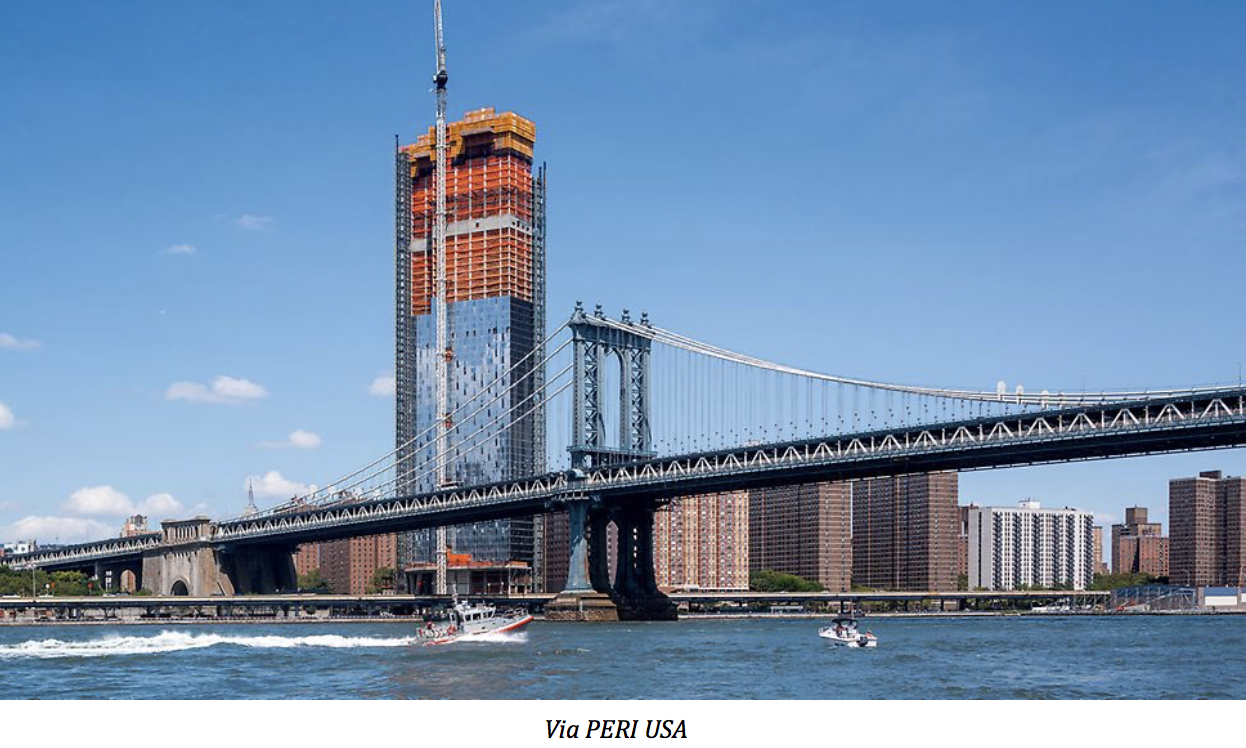 The best-selling building of the first half of 2019 was One Manhattan Square, an 80-story residential tower currently under development at 252 South Street on the Lower East Side. A total of 119 units sold at the 815-unit luxury tower developed by Extell Development during the first six months of the year, for a combined sales volume of $195 million. Designed by Adamson Associates Architects and Meyer Davis Studios, the amenity-rich project is scheduled for completion by the end of the year. 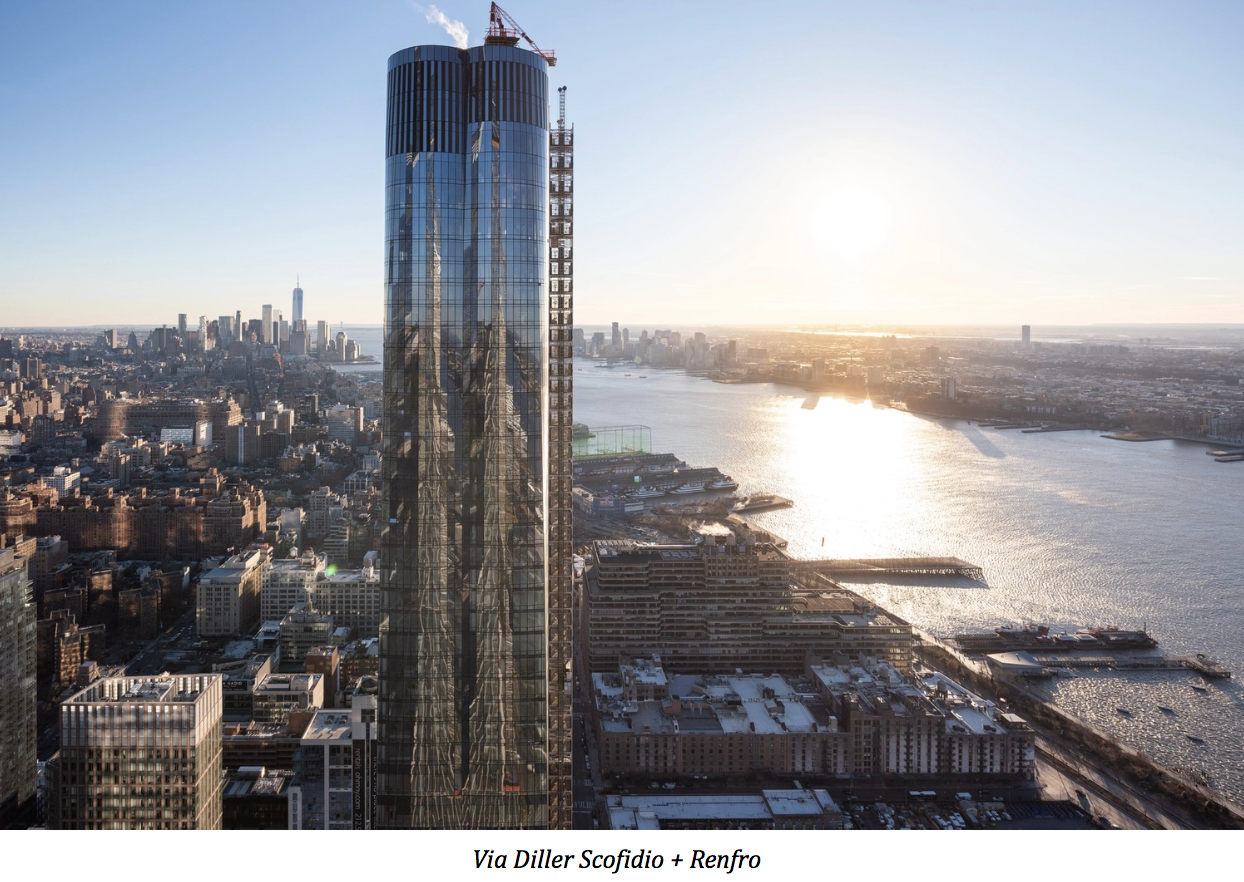 The 88-story residential tower dubbed 15 Hudson Yards was completed earlier this year in Hell’s Kitchen, boasting a design by Diller Scofidio + Renfro and Ismael Leyva Architects. The tower developed by Related Companies and Oxford Properties Group managed to sell 101 units worth a combined total of $380 million through June 2019, making it the second-best-selling building of the year so far. Part of the massive Hudson Yards project, the skyscraper offers world-class resident amenities in a well-connected location in Midtown Manhattan. Related Sales is marketing the property to potential buyers alongside Corcoran Sunshine Marketing Group. The Greenpoint, a 40-story luxury residential tower developed in 2018 by Mack Real Estate Group, Palin Enterprises, and Urban Development Partners, was the best-selling building in Brooklyn so far this year. A total of 62 units sold at the building at 21 India Street, for a combined dollar volume of $95 million. With a design by Ismael Leyva Architects, the luxury tower in the borough’s up-and-coming Greenpoint neighborhood offers studio- to three-bedroom apartments and a plethora of top-notch amenities, and it’s being marketed by Citi Habitats and Pandiscio Green. 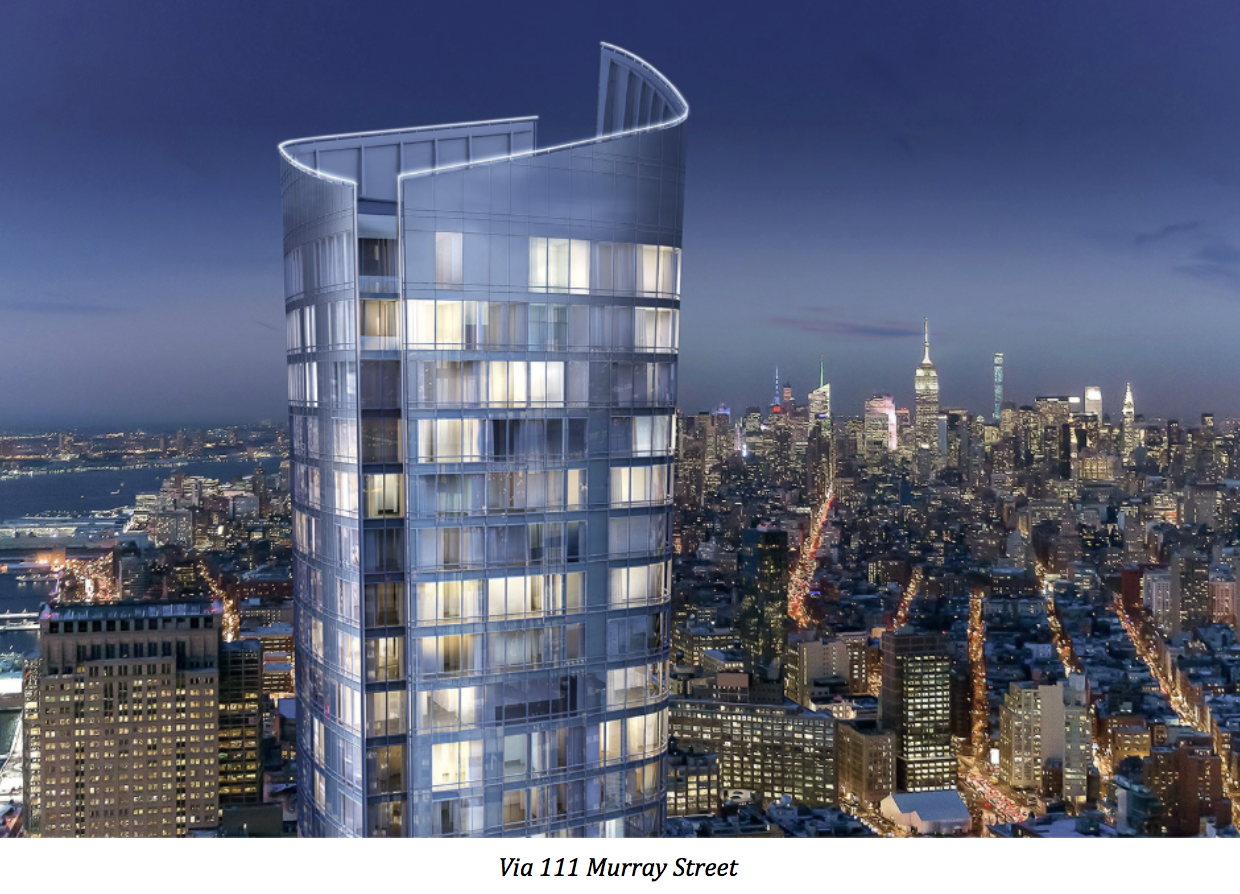 Developed by Fisher Brothers together with Witkoff Group and New Valley, the residential tower at 111 Murray Street was completed in 2018. The tower’s convenient location at the border between Tribeca, FiDi and Battery Park City attracted a fair share of home buyers during the first half of 2019. Developers sold 53 units worth a combined total of $350 million at 111 Murray Street in 2019, with help from Douglas Elliman, which is in charge of marketing the property. The 64-story tower boasts a design by acclaimed architecture firm KPF, which worked alongside Hill & West Architects and interior designers at MR Architecture + Décor and Rockwell Group. The 55-story tower designed by architect Rafael Vinoly is reportedly ‘the tallest tower on Fifth Avenue,’ and the fifth-best-selling building on our list. Developers Victor Group and Lendlease managed to sell 42 units at the tower, for a combined volume of $137 million, in the first months of 2019. The tower is conveniently located in Murray Hill, just steps away from Madison Square Park, and offers 130 luxury units marketed by Corcoran. Completed in 2018, 277 Fifth Avenue boasts a similar design to Vinoly’s crown jewel at 432 Park Avenue, the tallest residential building in the world. 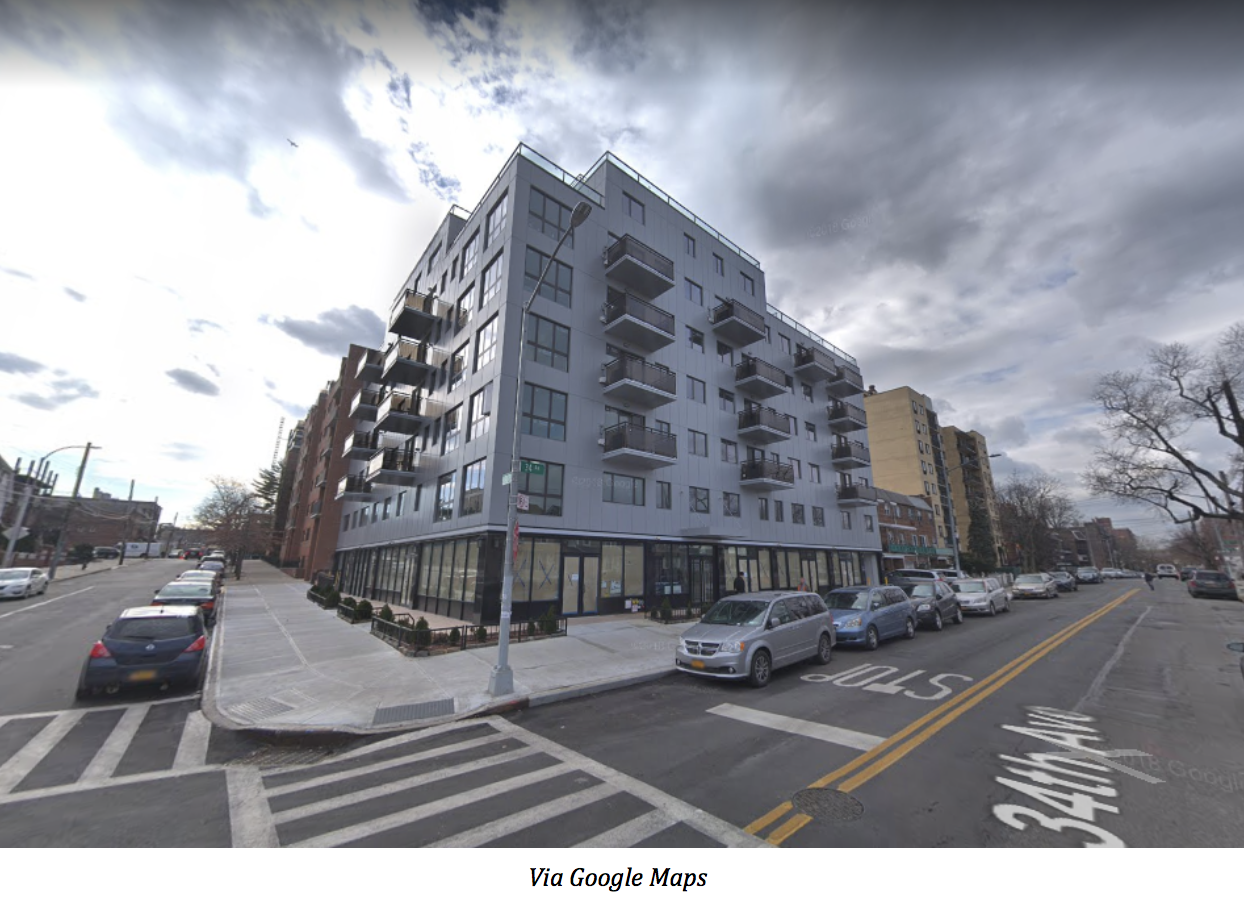 In 2015, Xin Lin and 145-36 Realty LLC filed plans to develop a 55-unit condo project at 145-38 34th Avenue in Flushing, Queens. The Linden Hill development was completed in 2018, boasting a design by Michael Kang and featuring 9,850 square feet of medical office space on the bottom two floors. The project dubbed The Grandview Commons was constructed on the site of a former two-story, deteriorating residential building, which was demolished to make way for the new project. It proved to be a successful endeavor, with 39 units selling for $22 million during the first half of 2019. According to our research, Queens-based Winzone Realty is handling marketing for the Grandview Commons project. 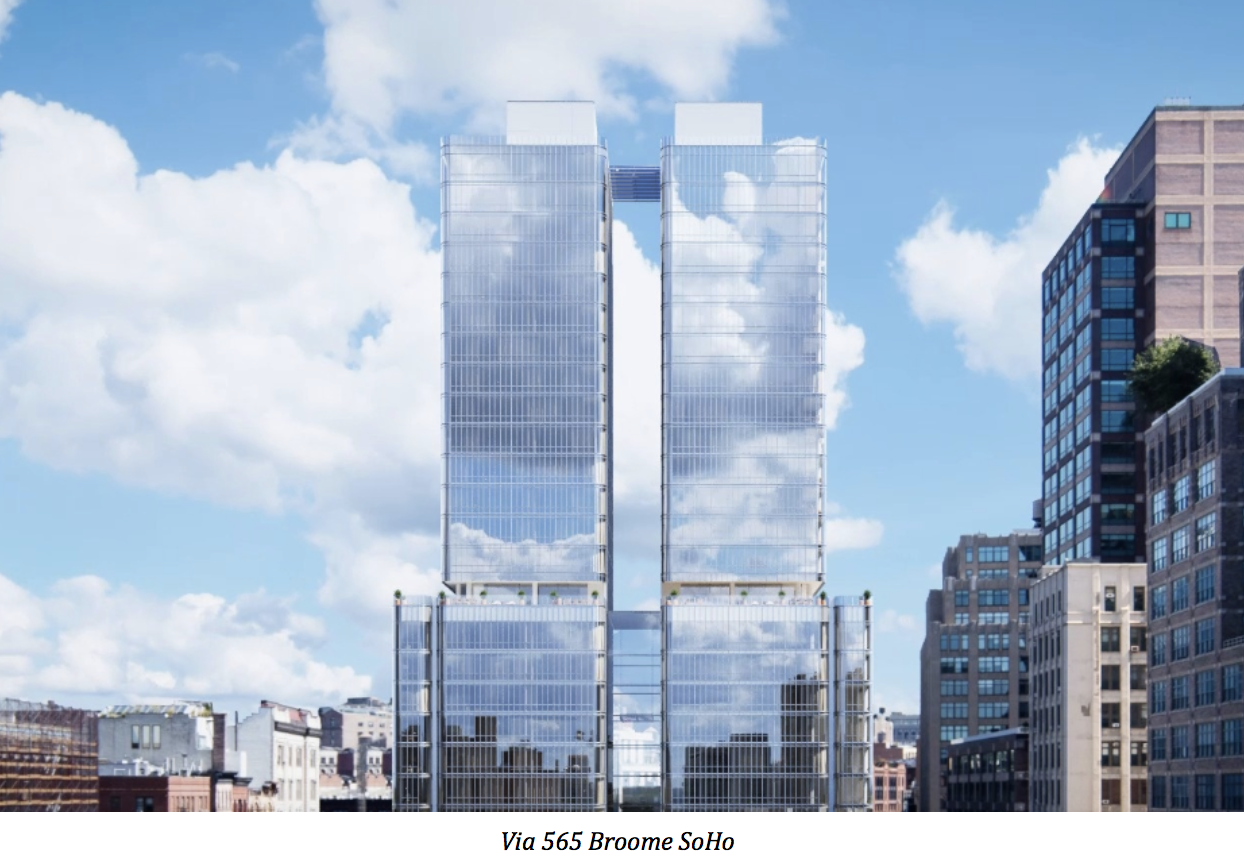 Designed by the internationally acclaimed architects at Renzo Piano Building Workshop, the 30-story, luxury condo project at 565 Broome SoHo appears to be highly desirable by NYC homebuyers. During the first months of the year, developers Bizzi & Partners, Aronov Development and Halpern Real Estate Ventures sold 38 units worth a combined total of $152 million. The SoHo condo is being marketed by Douglas Elliman, Knightsbridge Strategies and Noë & Associates, and boasts best-in-class amenities and interiors designed by Paris-based firm RDAI. 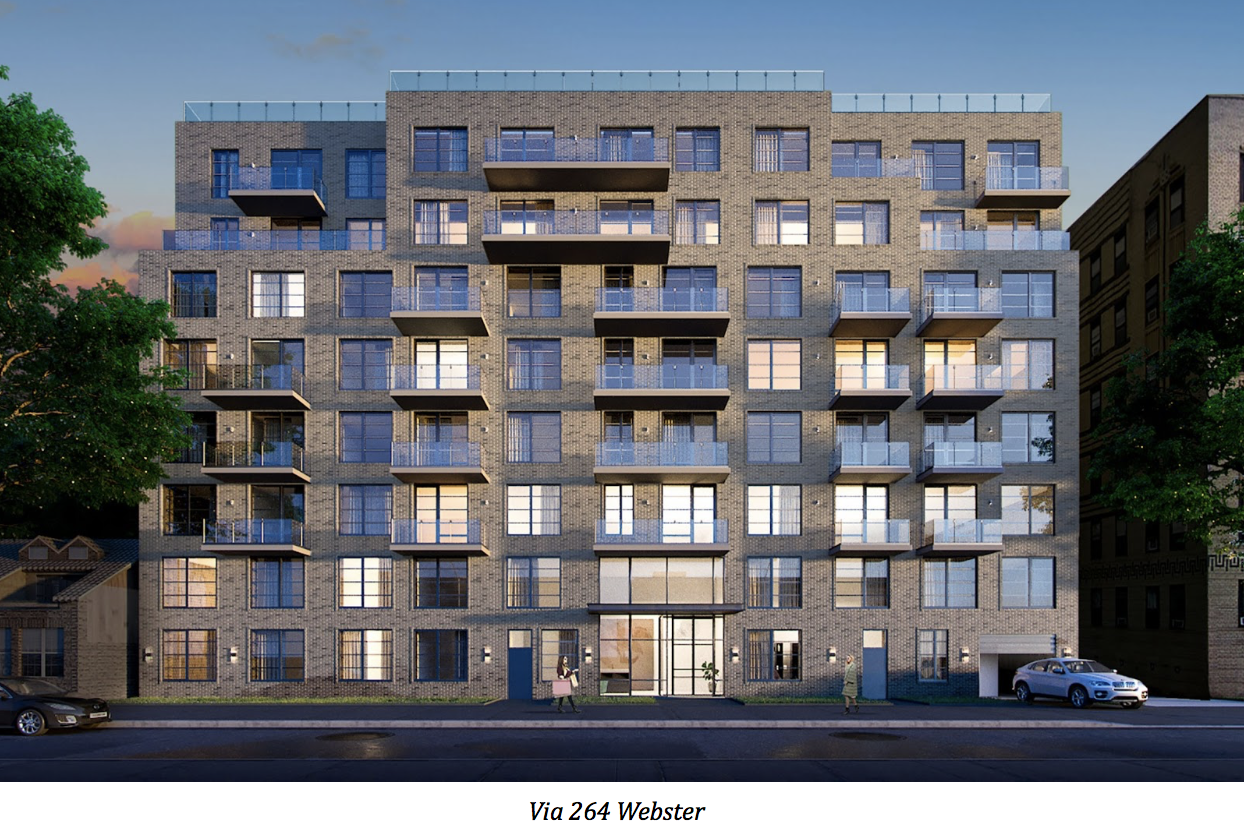 The luxury condominium project in Brooklyn’s Kensington neighborhood sold a total of 37 units for a combined $23 million in dollar volume in the first half of the year. Developed by The Horizon Group and designed by Kutnicki Bernstein Architects and interior designer Brittany Marom, 264 Webster was completed in 2018 and offers an anticipated 15-year tax abatement for each unit. The $621,000 median sale price at 264 Webster is significantly below similar availabilities found in Brooklyn, but the amenity package is equally refined. By comparison, the median sale price for units sold at The Greenpoint was $1.6 million for the first half of the year. 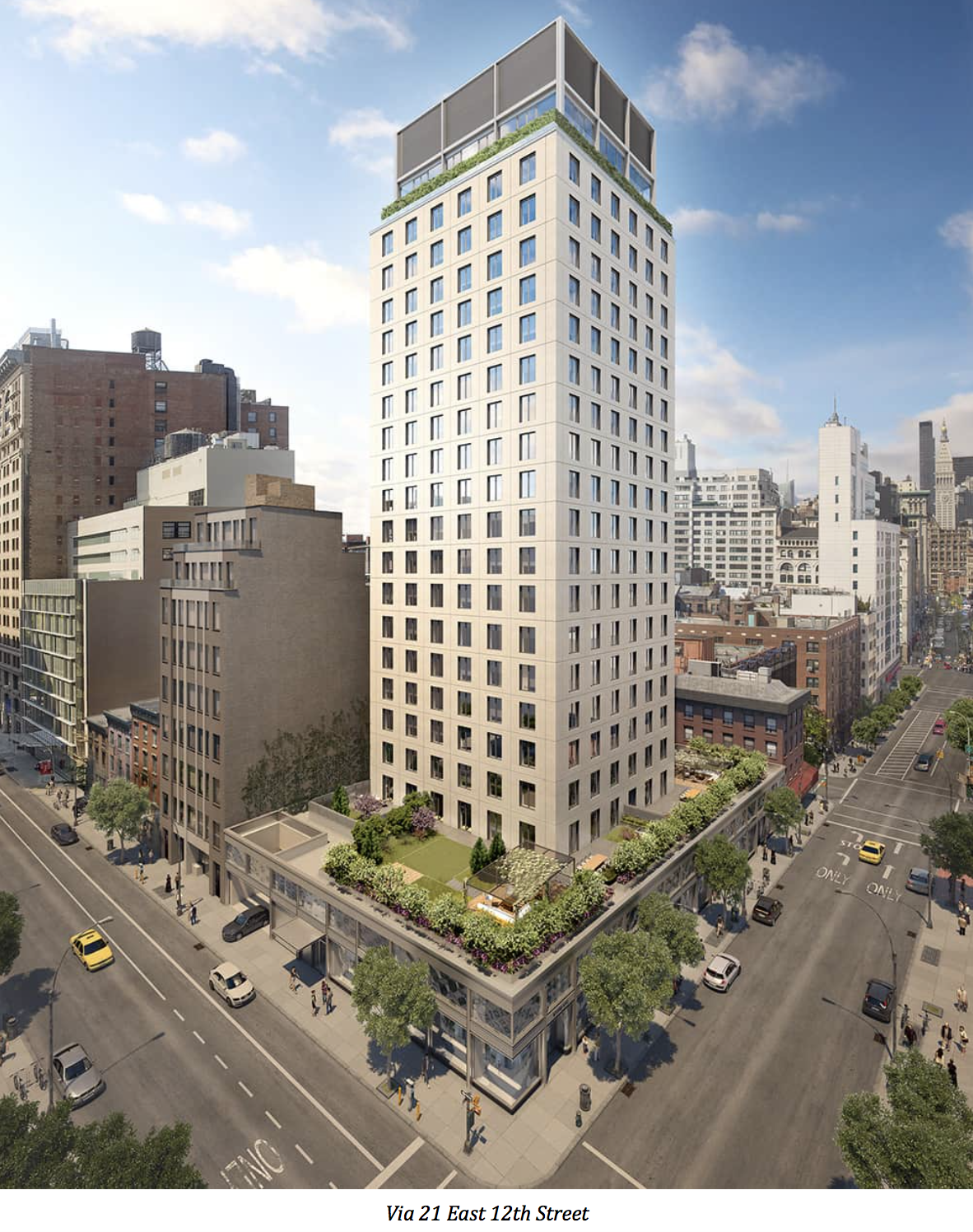 The 22-story condominium tower at 21 East 12th Street in Manhattan’s Greenwich Village was designed by Selldorf Architects and developed by William Macklowe Co. alongside The Goldman Sachs Group. The 52-unit project sold 34 units during the first half of 2019, for a combined sales price of $173 million, marketed through Corcoran. 21 East 12th Street offers one- to four-bedroom luxury condos priced from $2.4 million to more than $16 million, according to the agency, and features state-of-the-art amenities and expansive views of the Midtown Manhattan skyline. 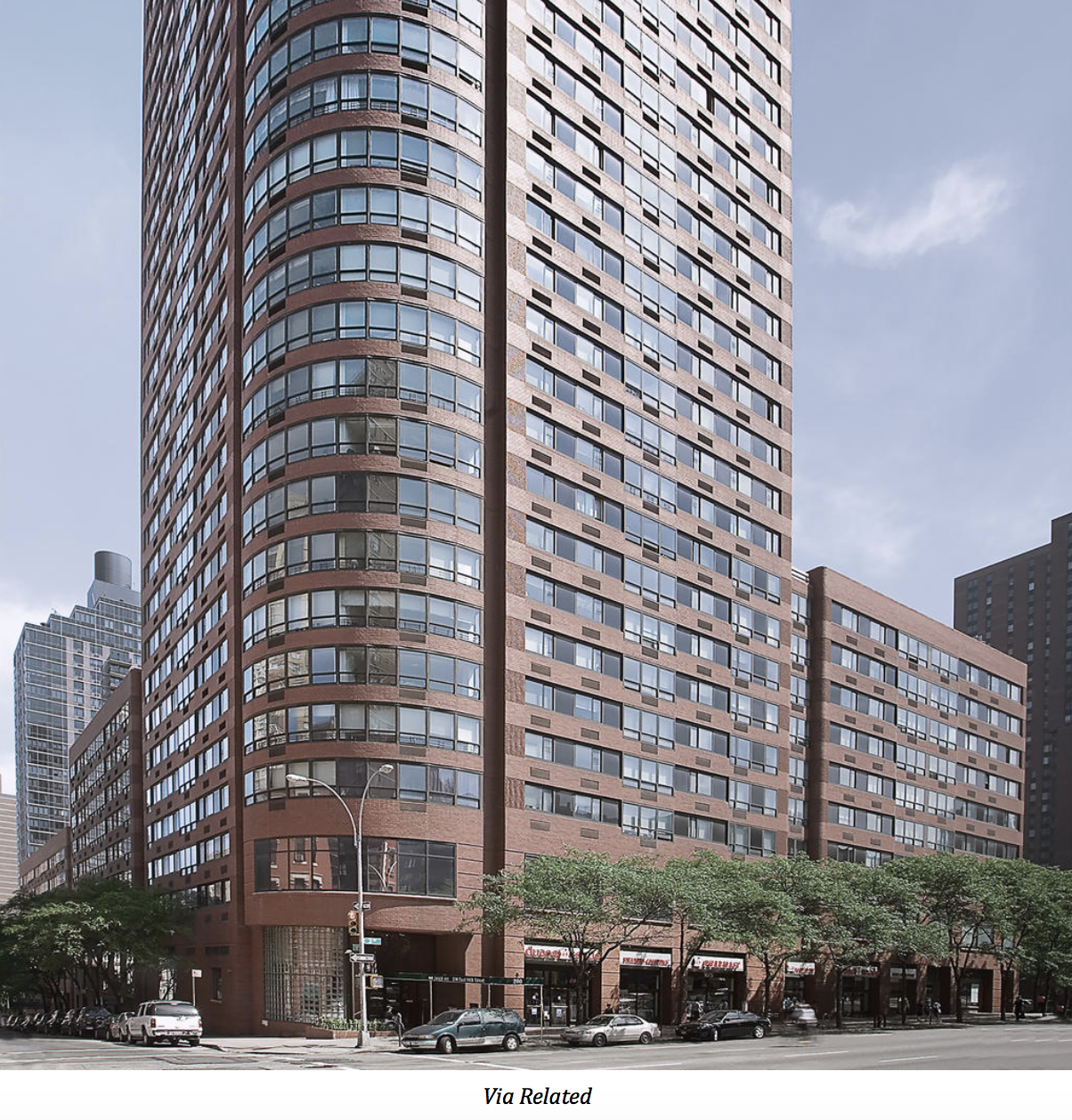 Last but not least, Related Companies’ condo project at 200 East 94th Street on the Upper West Side was another bestseller during the first half of the year. The project dubbed Carnegie Park sold 34 units for a total of $65 million through June 2019, with units marketed by Related Sales and Corcoran. The 31-story Yorkville condo project offers best-in-class amenities and common areas designed by renowned architecture firm Robert A.M. Stern Architects. The original post-war building was completed in 1987 and was renovated and converted to 287 luxury condominiums in 2017.

More from the blog
A look at 11 of the Greenest Residential Buildings in NYC
Top 20 Homes Sales of Q2 in NYC - Goodbye Amazon, Hello Jeff Bezos!
The 100 Most Expensive NYC Zip Codes of H1 2019
Rent-Burdened New Yorkers Turn to Coliving, Sacrificing Personal Space for A Good Location
A Guide to the New York state and NYC Mansion Tax
Tips for NYC Homebuyers
Listing Your Home For Sale By Owner is Easier Than You Think
The 10 Tallest Residential Towers Under Construction in NYC