The 10 Tallest Residential Towers Under Construction in NYC

The PropertyClub Team
Jul 9th 2019
Share:
New York City is reaching higher and higher towards the sky, with numerous supertall projects planned or already in the works, and not just in Manhattan. The tallest building in Brooklyn was completed earlier this year, and soon it will be surpassed by another skyscraper that will be the highest structure outside Manhattan. In Queens, rezoning plans and the high demand for luxury condominiums has resulted in various residential skyscrapers popping up on the borough’s skyline, and the tallest one of them is already underway.

The flurry of new residential supertalls crowding and forever changing the city skyline can be attributed to the increased demand for luxury housing in transit-oriented urban centers. Those who have a few million dollars to spare now have plenty of options to choose from, and there are many willing to shell out huge price tags to live in a posh, state-of-the-art residential tower designed by a starchitect.

There are already various options to choose from if you’re in the market for luxury housing, including the stylish new towers on Billionaires’ Row or the glass-clad skyscrapers rising in Hudson Yards. Yet soon enough the range of options will broaden, as one by one, supertalls continue to top out in the five boroughs. We wanted to see which are the ten tallest residential skyscrapers under construction right now in New York City, and how they will impact the city skyline. Check them out below and keep reading for some highlights about each one. 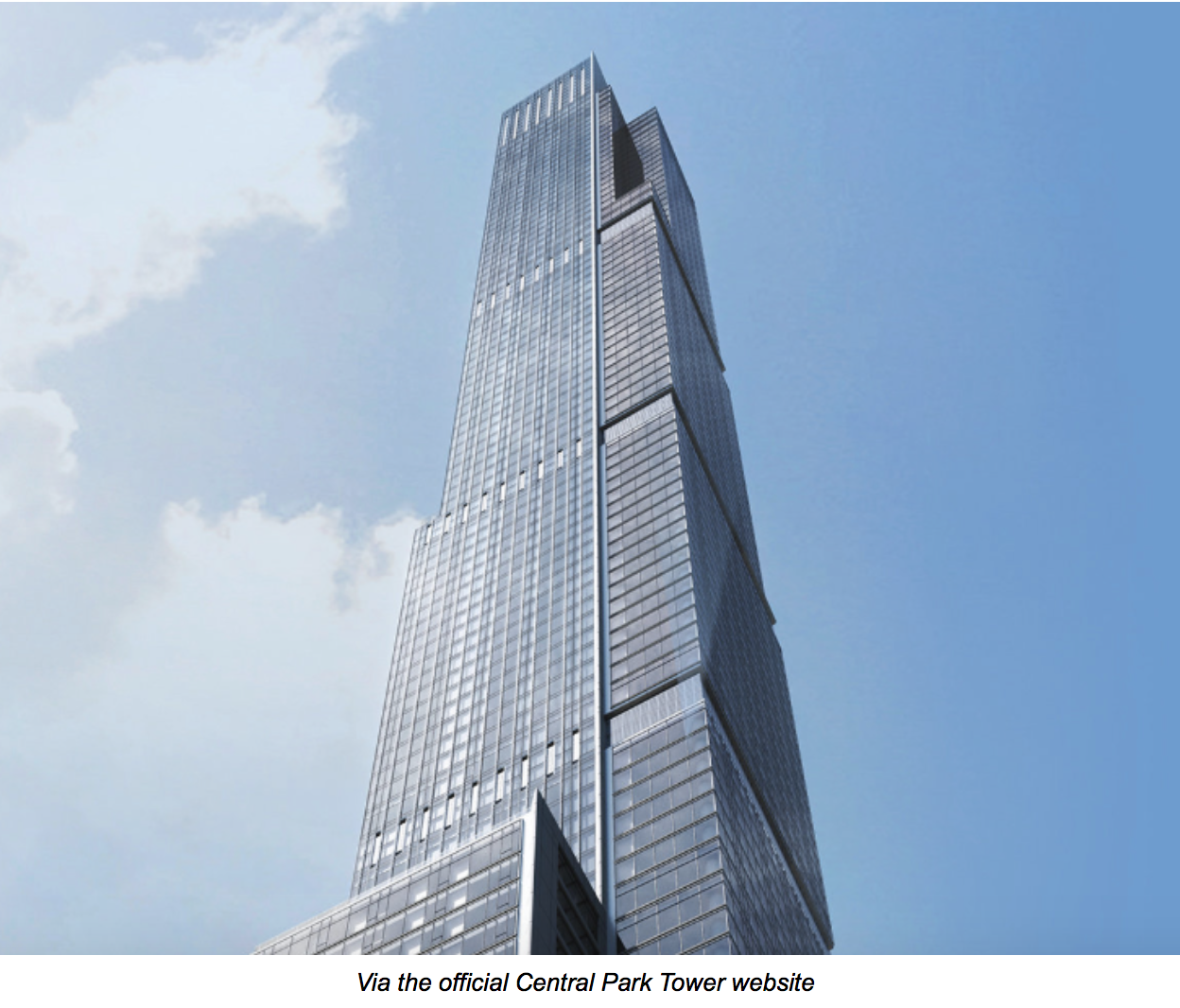 The supertall Central Park Tower designed by Adrian Smith, the mastermind behind the Burj Khalifa, is currently rising at 225 West 57th Street in Manhattan. The project, spearheaded by Extell Development, will ultimately feature 179 ultra-luxurious condos on 131 stories. Upon completion in 2020, the tower will be the tallest residential building in the world, rising 1,550 feet on Billionaires’ Row, and it will also include New York City’s first Nordstrom department store. 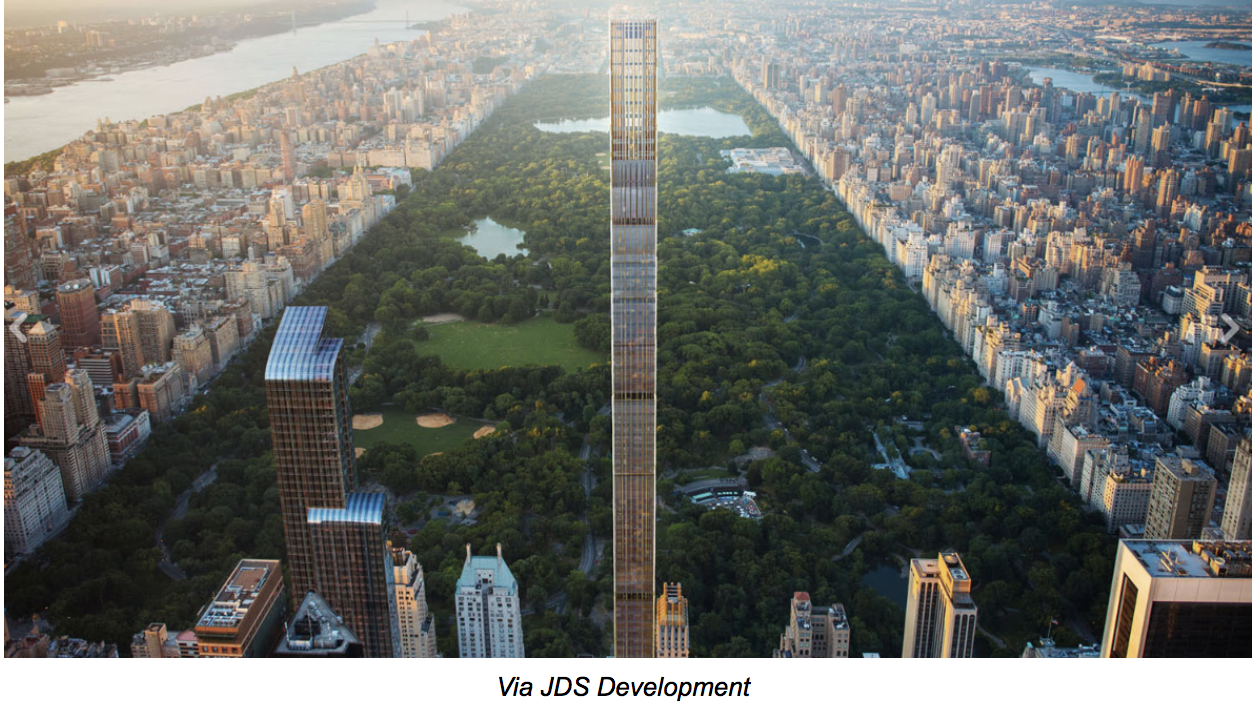 Developed by JDS Development, Property Markets Group and Spruce Capital Partners, the sleek, super-skinny tower at 111 West 57th Street is another gem added to the stylish, sky-high cluster of towers on Billionaires’ Row. The tower will rise 1,428 feet into the air and will incorporate the landmark Steinway Building erected back in 1925. The SHoP-designed building has been dubbed the Steinway Tower because of this, and it topped out in April, with its 43 ultra-luxury residences selling out fast. The tower is one of the skinniest skyscrapers in the world and offers stunning views of Central Park and the Manhattan skyline. Construction is estimated to be completed in 2020. 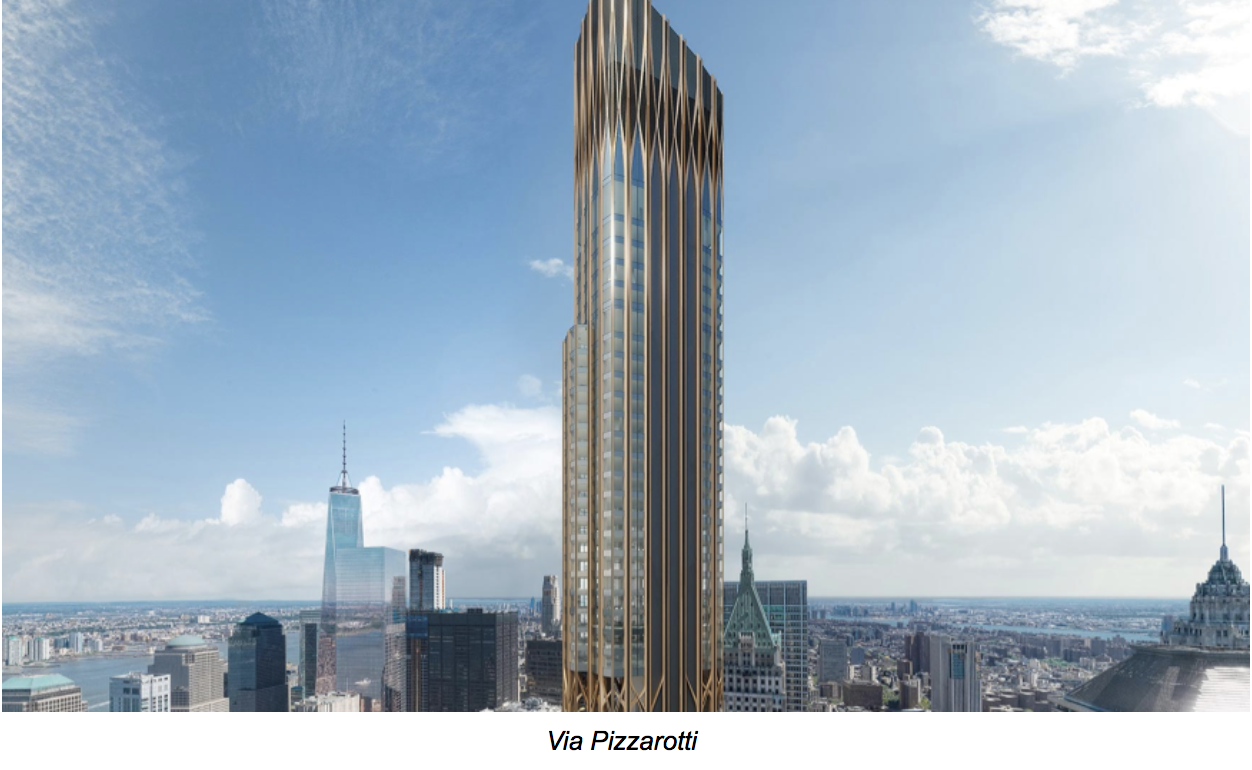 The 83-story tower at 45 Broad Street is being developed by Pizzarotti and will rise 1,127 feet above Manhattan upon completion in 2021. Designed by CetraRuddy in a unique ‘Neo Art Deco’ style, the tower will offer 245 luxury residences in the heart of the Financial District. 45 Broad Street will be the tallest condominium tower in Lower Manhattan and is located directly across the New York Stock Exchange. 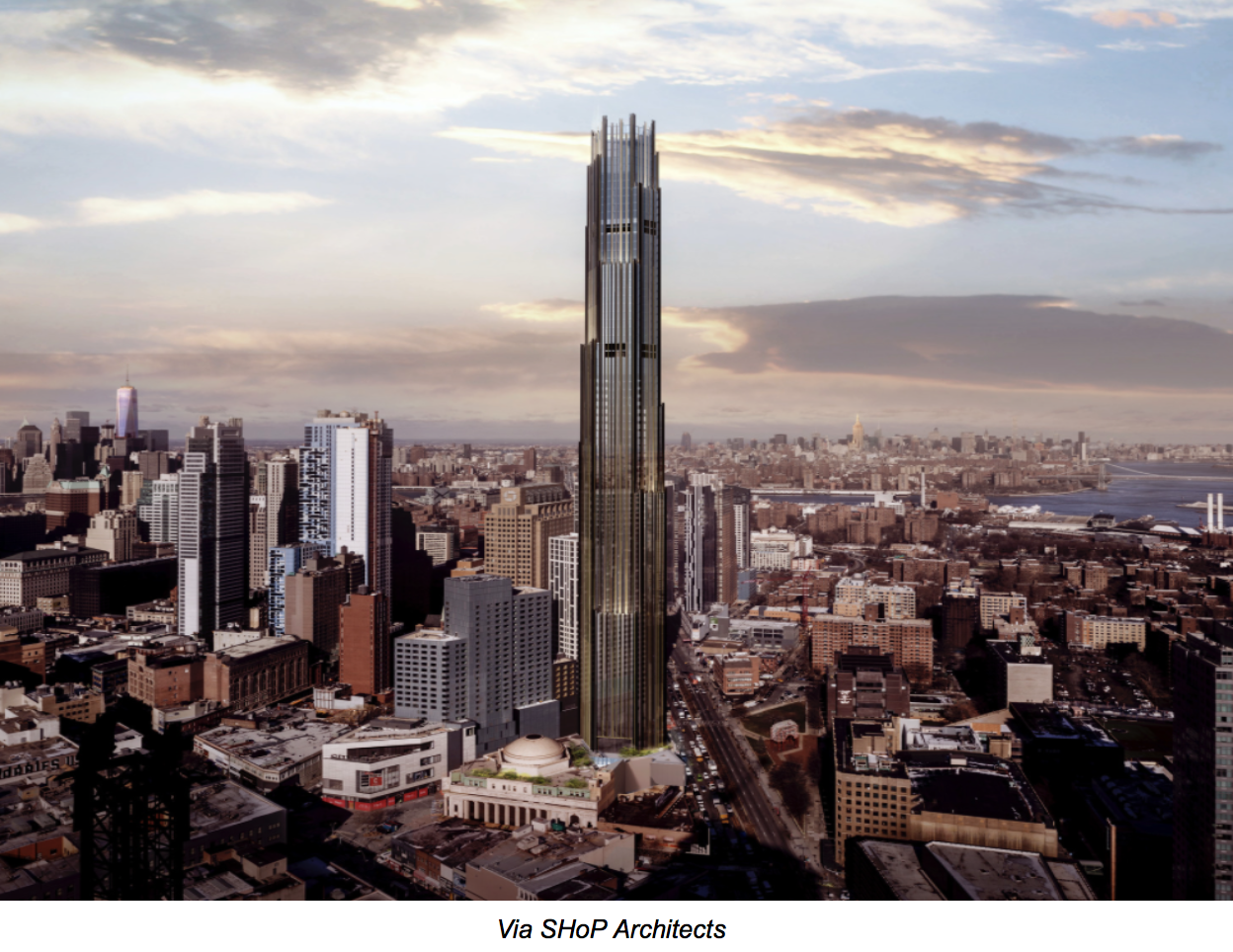 Another supertall residential tower developed by JDS, 9 Dekalb Avenue will be the tallest building in Brooklyn when finished in 2022, surpassing the current titleholder, the recently-completed Brooklyn Point. Designed by SHoP, 9 Dekalb will feature 150 condos and 425 apartments, as well as 140,000 square feet of commercial space. It will be the first supertall in the borough and the tallest building in the city outside of Manhattan. 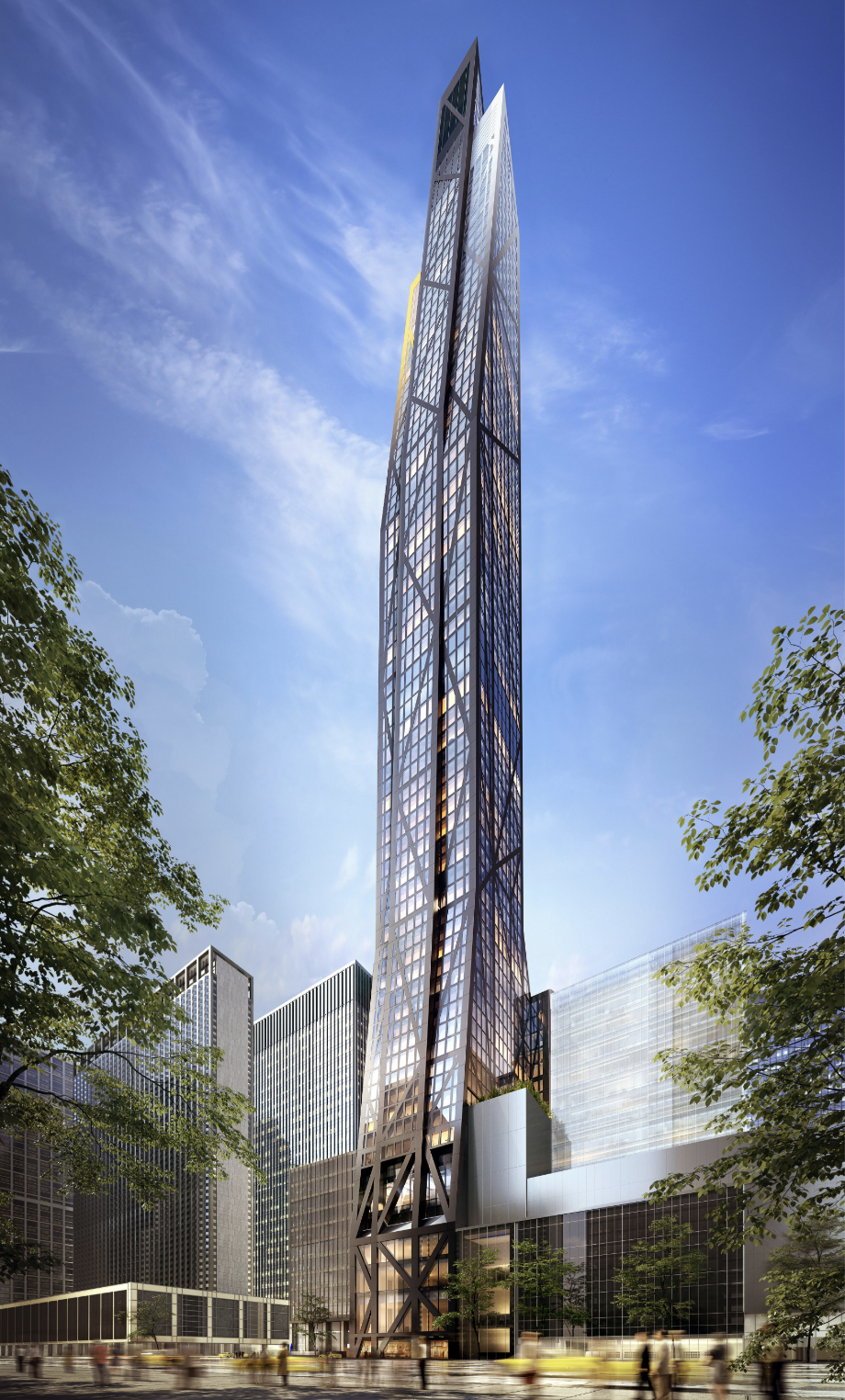 Located at 53 West 53rd Street and rising above The Museum of Modern Art (MoMA), 53W53 is an elegant, 1,050-foot-high residential condominium tower designed by world-renowned architect Jean Nouvel. The building's sculptural form, progressive yet reminiscent of classic Manhattan skyscrapers, incorporates an innovative exposed structural system, the diagrid as Nouvel calls it. The tapering design and the diagrid mean that the layout of each condominium residence is unique. The property has one hundred forty-five residences that range in size from one-to-five bedrooms, including full-floor homes and duplex penthouses with private elevators. New York-based interior architect Thierry Despont designed 53W53's interiors.
The building's 17,000 square foot full-floor Wellness Center will feature extensive amenities including a 65-foot swimming pool flanked by two impressive vertical gardens designed by French botanist Patrick Blanc, a fitness center with private training area, sauna, steam rooms, golf simulator, and squash court operated by The Wright Fit. Other amenities comprise of a library, cinema, children's playroom, private storage, and temperature-controlled wine vaults available for purchase.
MoMA Connection: The Museum of Modern Art will have three new gallery levels within the base of 53 West 53 on floors 2, 4 and 5. Purchasers at 53W53 will benefit from title to a special MoMA Benefactor membership, which affords substantial museum benefits and privileges. 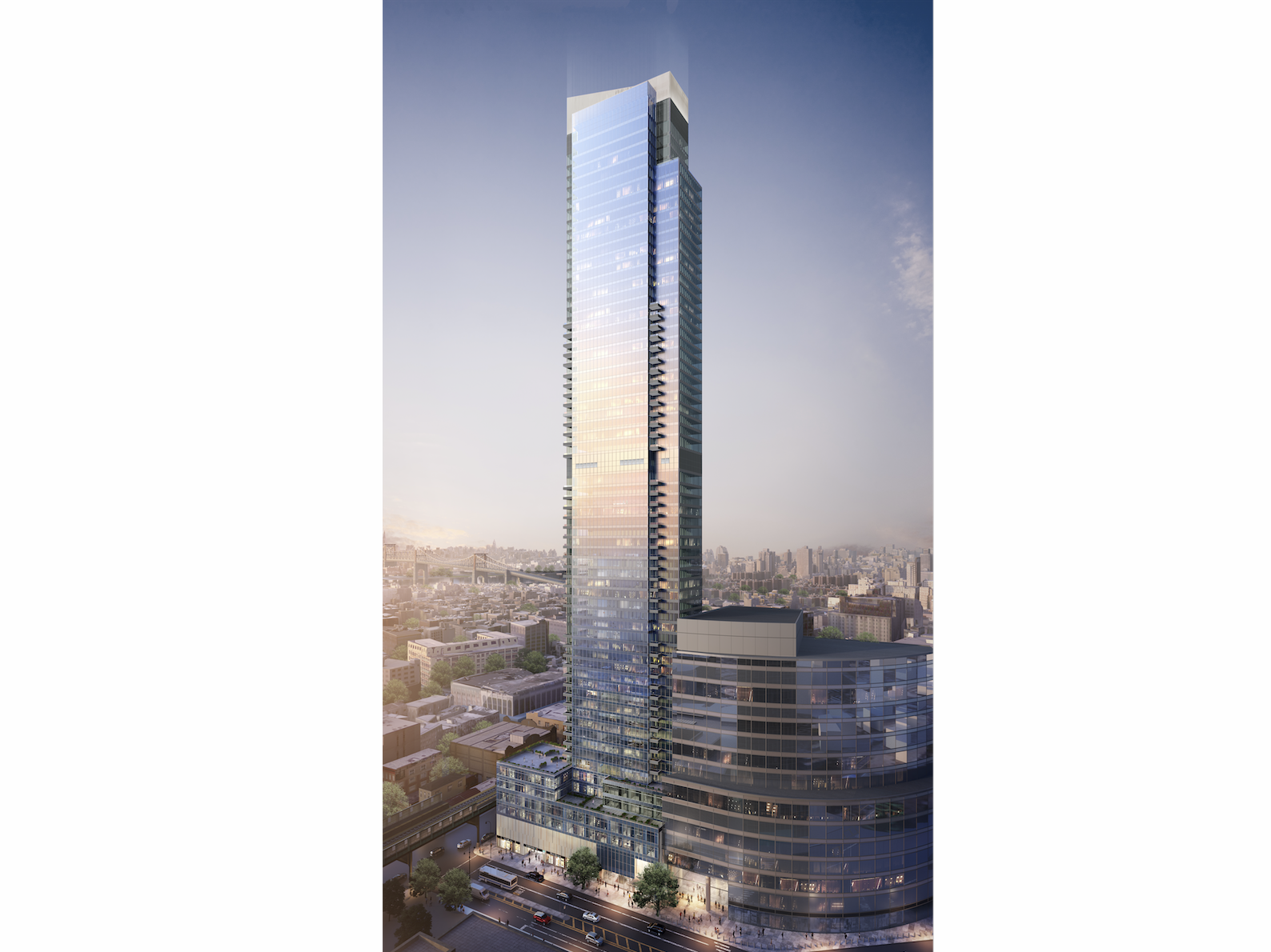 The tallest building in Queens is currently under construction at 3 Court Square in Long Island City and is also known as the Skyline Tower. Designed by Hill West Architects and developed by United Construction and Development Group, Skyline Tower NYC will soar 778 feet above the city. The 66-story tower will offer 800 luxury condos priced between $500,000 and $4 million. Construction is expected to be completed in 2021. 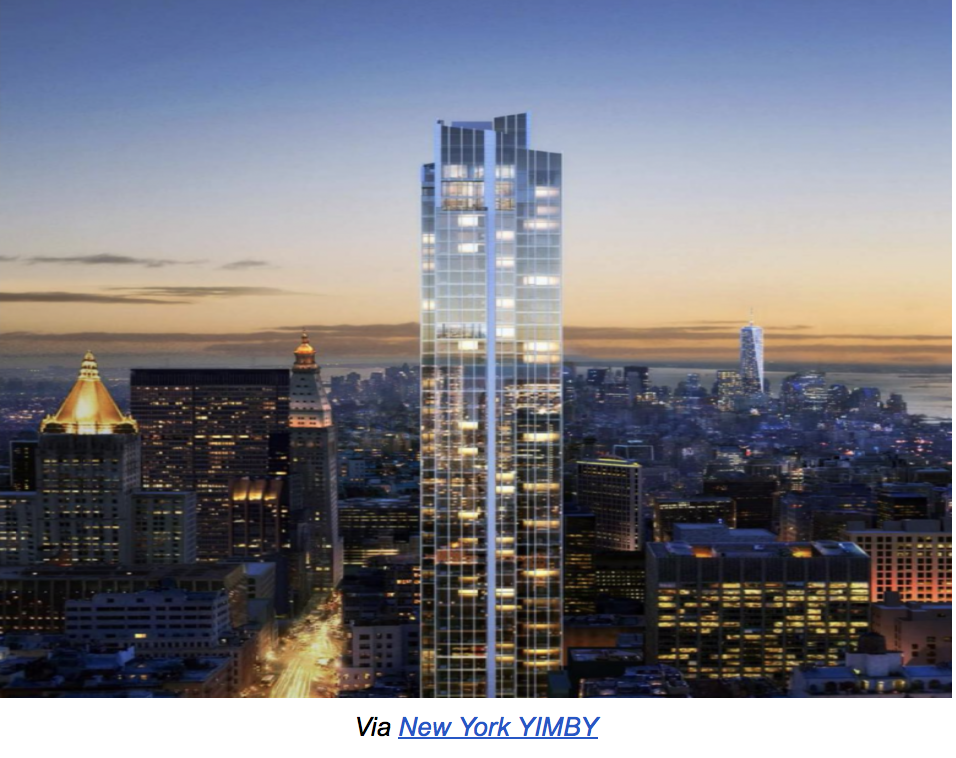 The 62-story, 756-foot skyscraper at 15 East 30th Street will be the tallest building in NoMad when construction is finalized this year. The Handel Architects-designed building also known as Madison House topped out this June and is being developed by JD Carlisle and Fosun International. The tower will feature 180 condo units as well as street-level retail space. 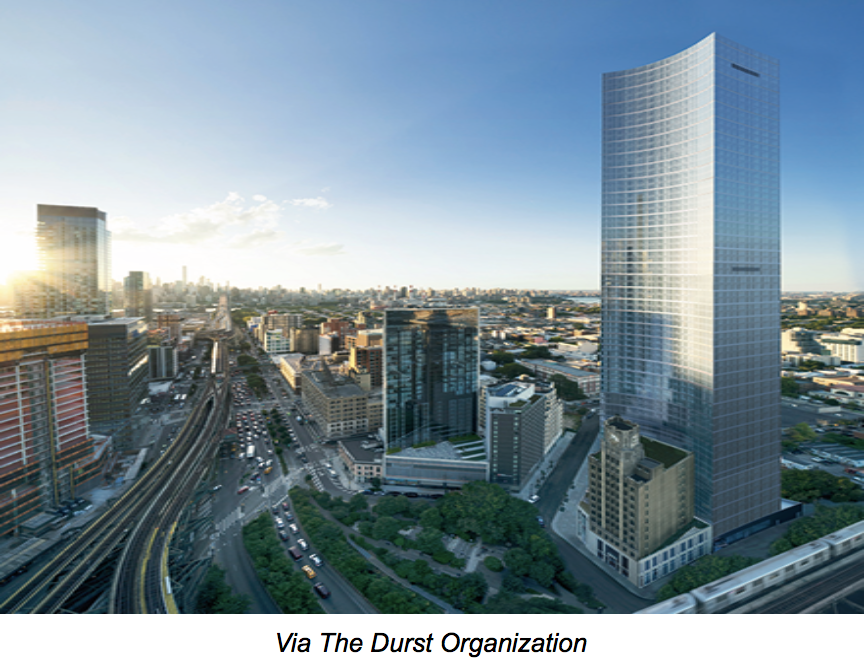 Queens Plaza Park, or ‘Sven,’ as the project is named on The Durst Organization website, will rise 755 feet on 67 stories, and is scheduled for completion in 2021. Located at 29-37 41st Avenue in Long Island City, the tower was designed by Handel Architects to incorporate the landmark Clock Tower building, which used to house the Bank of Manhattan Co. back in the late 1920s. Sven will be the second-tallest structure in Queens after the Court Square City View Tower. The project will include 958 rental units, 300 of which will be affordable. 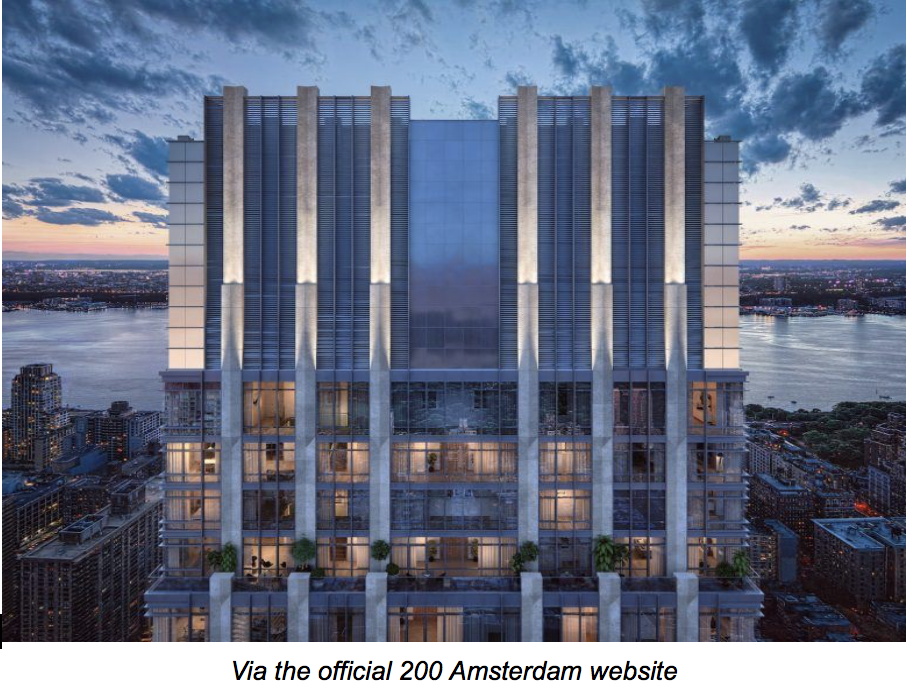 The 51-story, 669-foot residential tower at 200 Amsterdam Street would have become the tallest building on the Upper West Side when it was first announced by developers SJP Properties and Mitsui Fudosan America. However, Extell’s 775-foot 50 West 66th Street project is set to surpass it, as the City Council has recently approved revised plans for that development. Both towers have had their share of controversy, but in the end, both are moving forward. This spring a court ruling pulled the permits for the 200 Amsterdam project, leaving it shrouded in uncertainty. City officials, however, reviewed the project again in June 2019 and gave developers the green light. 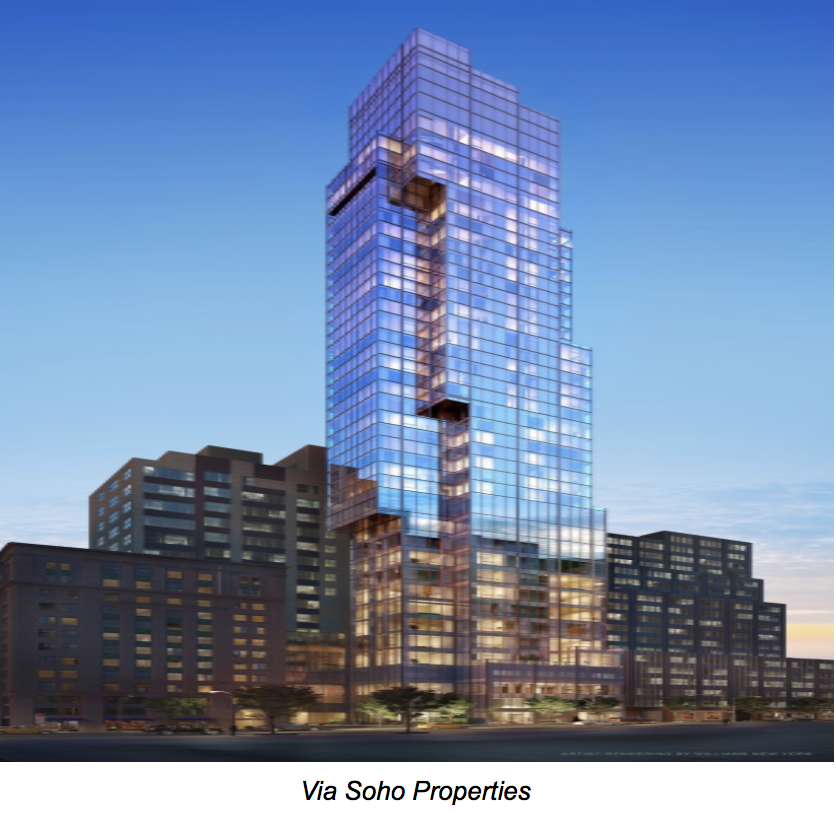 The 45 Park Place project is another controversial development, as it was initially meant to house a Muslim cultural center and mosque near the site of the former World Trade Center towers. Located on the site of a former synagogue, just blocks away from the WTC, 45 Park Place has been reimagined to feature 50 residential units and a three-story Islamic museum and is scheduled for completion sometime this year. The tower will rise 665 feet above Tribeca and is being developed by Sharif El-Gamal and designed by SOMA Architects.